Physical Distancing Requires us to Rethink our Public Spaces 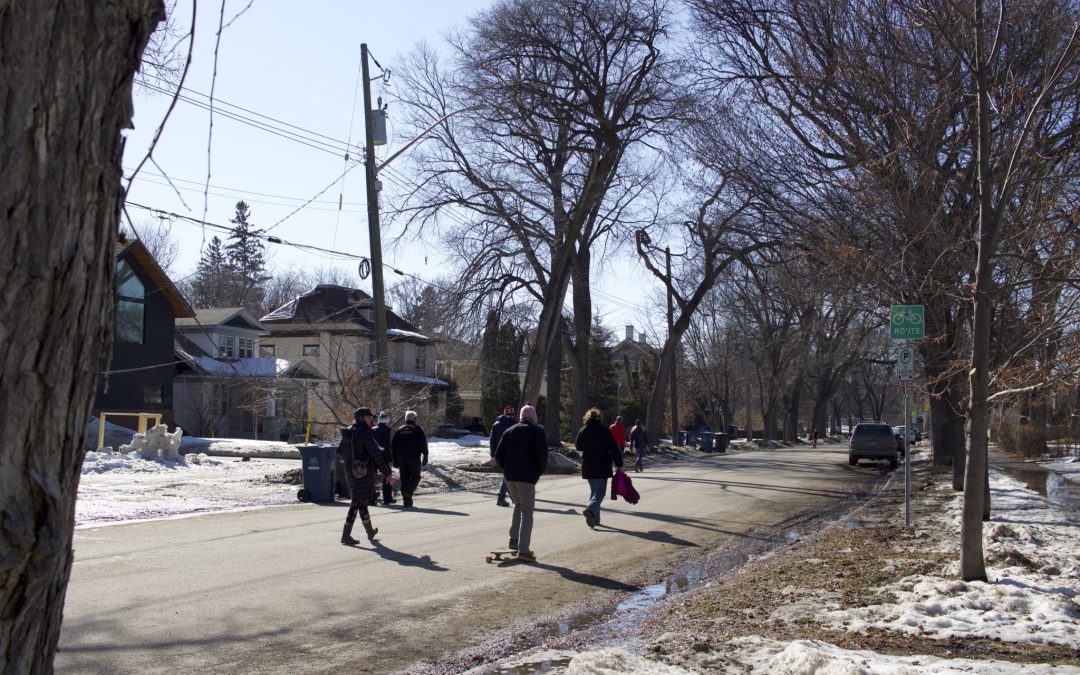 With COVID-19, we are seeing a rapidly changing world around us. People are being asked to stay home, whether they are showing symptoms or not, and stay 2 metres (6 ft) apart from anyone they encounter while outside.

Whether people are out to get essentials or out to get some much needed fresh air, it is becoming more and more apparent that our urban environment does not accommodate the 2-metre rule for those walking and cycling. The average sidewalk width is 1.5 m and the average bike lane width is 2 m, meaning that people walking and cycling are often forced into the way of vehicles if they want to adhere to the physical distancing protocols.

During this unprecedented time, Green Action Centre is calling for;

It is time that we rethink how our public space is allocated and prioritize those walking, cycling, and taking transit over those in private vehicles.

The province of Manitoba, like many other provinces, is under a State of Emergency to help slow the spread of COVID-19. Since the first probable case in Manitoba was announced on March 12th, we have seen rapidly changing recommendations and guidelines in regard to group sizes, closures, and safety protocols. Currently, the Government is enforcing the following precautionary measures;

With all of this, Public Health is still advising people that it’s safe to go outside for fresh air, for those who are not experiencing symptoms.

Dr. Deena Hinshaw, Alberta’s Chief Medical Officer of Health, said on March 20th that, “there is no danger if someone who is self-isolating goes for a walk outside and stays 2 metres away from others. Going outside and being active should be encouraged.”

Dr. Brent Roussin, Manitoba’s Chief Public Health Officer, encouraged Manitobans on March 29th to, “go outside and be healthy but avoid crowds. Turn around if you see crowds.”

During time outside, people are also encouraged not to touch rails, garbage cans, or beg buttons which are potential sources of transmission (if you are able to avoid them). Public Health officials continue to stress that it is extremely important that people maintain the recommended 2-metre distance while outside.

For developing news on COVID-19 in Manitoba, please refer to the Government of Manitoba website here.

People Need to Get Outside

People need to get outside, especially during COVID-19, to run essential errands or for physical and mental health. Outdoor activity has many benefits, including; exposure to sunlight (vitamin D), reduced screen time, social interaction (from a safe distance), and increased physical activity.

Reduce stress – It has been proven that being in green spaces (like forests, gardens, and parks) can significantly reduce cortisol hormones (stress hormone) and raise endorphin levels and dopamine production (both of which may promote “happiness”).

Promote activity – Green spaces also promote doing physical activity, which can give your brain a boost, can improve your self-esteem, reduce stress, and generally improve your quality of life.

In other words, getting outside and being in nature are a winning combination for your psychological and physical well-being. – Canadian Mental Health Association (Mental Health and the Great Outdoors)

In this time of physical distancing, taking a break to connect with nature and our community is more important than ever, while maintaining the recommended 2-metres of distance.

More than Enough Space to Take

The way we choose to move takes up varying amounts of space. Our cities have been designed to accommodate the space required by personal vehicles, at the expense of those taking transit, cycling, and walking. 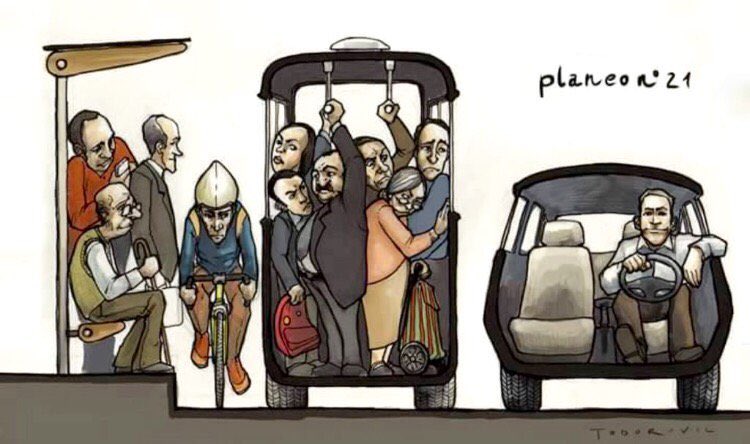 Transit users, pedestrians, and cyclists have had the continued experience of limited space in the public sphere. Transit users are often crammed into crowded buses, pedestrians cannot fit strollers and personal mobility devices on our shrinking sidewalks, and cyclists can rarely cycle side by side. This has been the reality in many North American cities for decades, and it has continued to be a threat to public safety, comfort, and enjoyment.

Now, in this time of physical distancing, the space discrepancy is even more apparent.

Sidewalks, in particular, are too narrow to allow for the passage of two people and if you add runners, dogs, and kids to the mix, it is even more challenging to pass safely. People are often forced to enter the street, posing additional risks.

At the same time, we are seeing reduced traffic volumes with increased traffic speeds.

“The city says despite a 30 per cent decrease in vehicles on the roads last week, the number of exceeding posted speed limits by more than 20 km/h increased by 30 per cent.” – As more drivers steer clear of roads, Edmonton says excessive speeding is up (CTV News Edmonton).

Needless to say, it is time for our cities to step in and reallocate some of the public road space to ensure citizens walking, running, wheeling, and cycling can do so safely. By using tactical urbanism tools, such as; pylons, planters, and bollards, cities can carve out some underused space for vehicles to make safe spaces for people.

Cities can look at removing vehicle lanes to widen pedestrian and cyclist spaces and/or designate alternating streets entirely to pedestrians and cyclists.

In communities where streets closures are not entirely feasible, slowing down vehicles is an important step to ensure people can utilize road space safely. According to the World Health Organization, 30 km/h is the ONLY safe speed on roads where there is shared use (i.e. driving, walking, running, and cycling). The risk of pedestrian death drops from 80% to 5% when speeds are reduced from 50 km/hr to 30 km/h.

During COVID-19, it is irresponsible to force people into the streets to maintain physical distancing without providing the necessary safety measures to ensure people are not at risk of injury and/or death while mixing with traffic.

“The evidence for slower speeds has always been strong,” says British transport planner Brian Deegan. “But right now we’ve got lots of key workers cycling and walking to work. And we have got kids out there walking for daily exercise. We have to keep them all safe—the case to reduce speeds has never been stronger.”

Implementing 30km/h speed limits is also an important part of flattening the curve, by reducing demands on a medical system that is close to reaching capacity. The World Health Organization is calling on local governments to lower speed limits to further reduce the strain on health systems. Lowering speed limits can reduce the severity of collisions and the number of crashes, which means fewer people will need to go to the hospital or need support from emergency response teams.

Physical distance requires all residential streets to be shared use and cities should take this opportunity to implement the only acceptable speed limit in shared use spaces to help flatten the curve.

To learn more about safe speeds, visit www.safespeedswpg.com and read our blog post on the topic.

Those walking, cycling, and taking transit often encounter touch-points that can be potential sources of disease transmission, such as; ‘beg’ buttons and the many touch-points found on public transit. To address this, cities can remove ‘beg’ buttons to ensure pedestrian and cyclist lights are automatically activated and implement fare-free public transit. Both of which help to eliminate unnecessary touch-points, while also helping to achieve greater equity in our transportation system.

Local ATU’s have been doing great advocacy work around issues of fare-free transit and back door loading, with success in many Canadian jurisdictions (Vancouver, Calgary, Montreal, Toronto, Regina, Ottawa, Brandon, Victoria, Saskatoon, Edmonton, Kingston, Peterborough, St. John’s, Halifax, Hamilton, Mississauga, and Guelph). However, we have not seen measures taken in Winnipeg to protect drivers and passengers during COVID-19.

Examples from Other Cities

Densely populated cities in Canada, such as; Toronto, Vancouver, Ottawa, and Calgary are finding ways to bar vehicle traffic from parts of the streets to allow pedestrians and cyclists to maintain the proper distance from each other. They are taking steps to allow for the safe movement of people looking for essential respite from their small urban dwellings.

In Toronto, this response was presented by Councillor Kristyn Wong-Tam, who said, “We’ve encouraged [these residents] to live downtown to prevent urban sprawl, we’ve said this is going to be your living space – and this is how it’s advertised, right, the streets are yours – we just have to now rethink what our infrastructure does during this time of COVID-19 health crisis.”

We have also seen leadership on this issue in the following locations;

New York City – the city has started closing some streets to vehicle traffic altogether, beginning with 4 main streets for 4 days.

Bogota, Columbia – the birthplace of Ciclovia was ready to spring into action, creating over 75 km of temporary bike lanes earlier this month to support walking and cycling safely.

Other cities, such as; Seattle, Portland, Philadelphia, and Minneapolis are also looking at implementing similar measures. To keep up to date on cities repurposing vehicle space during COVID-19, follow this database.

Green Action Centre will continue to encourage people to walk and cycle as long as it is safe to do so at the 2-metre distance. Keep an eye out for upcoming events, ‘Bike Everywhere Month‘ and ‘Commuter Challenge‘ to provide some resources, inspiration, and incentives!

(With contributions from Mel Marginet, Denae Penner, and Sean Carlson)