Steps toward a Green New Deal for Manitoba: Planning, Budgeting, and Restructuring for Change 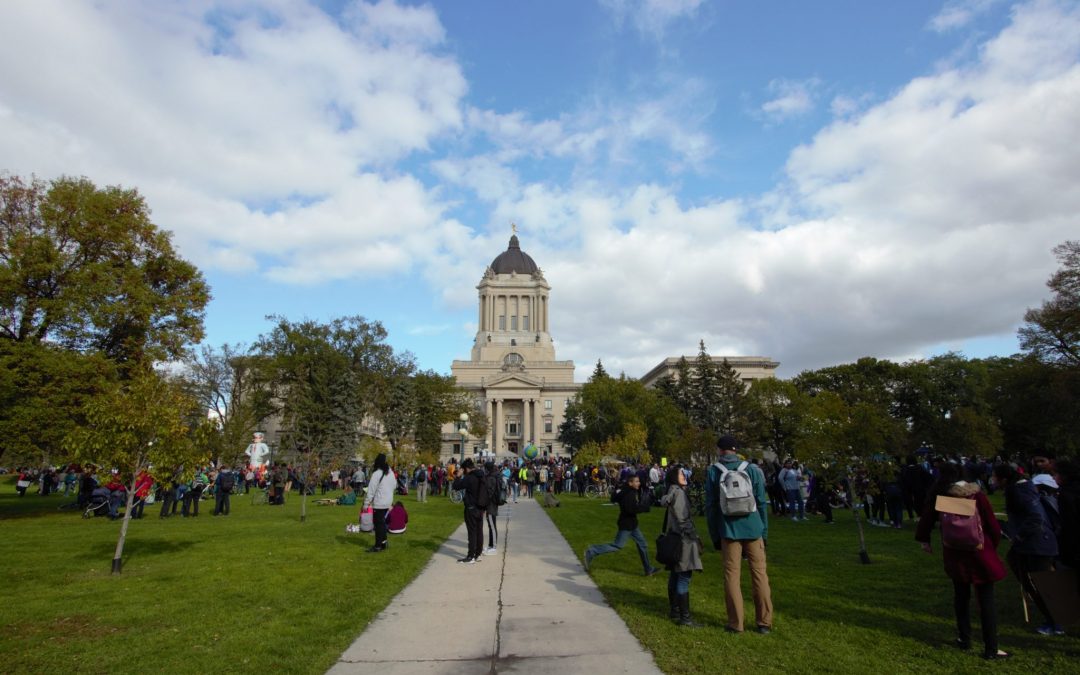 …is a coalition calling for a far-reaching plan to cut emissions in half in 11 years, in line with Indigenous knowledge and climate science; create more than one million good jobs; and build inclusive communities in the process. Its bold, justice-based vision is galvanizing thousands of people by recognizing, and working to respond to, the multiple crises we face.1

It is, in short, a social vision in search of a plan.

An Alternative Provincial Budget for Manitoba points the way

A far-reaching plan should identify goals and a vision to link them; a timeframe and metrics to define targets and mark progress, and tools and enabling conditions to promote desired changes. And, of course, without informed, competent planning, there will be no plan. Meanwhile perverse subsidies [and structural barriers] must be dismantled (Planning, p. 1).

APB 2020 is not itself a comprehensive plan for a Green New Deal, but it does point the way with special attention to climate action for buildings and transportation. For those interested in learning about the APB in an accessible format, a one-time Spring 2020 Change Starts Here newspaper has been released.

Kate Raworth’s Doughnut of social and planetary boundaries helps to visualize the challenge “to meet the needs of all within the means of the planet.”3 The light green doughnut is “an environmentally safe and socially just space in which humanity can thrive.” The red sectors on the outside represent ecological overshoot. Those on the inside represent shortfalls in components of human well-being. Social policy must reduce the ecological overshoot and social shortfall together. This is the demand of a Green New Deal for All. Locally, it is Green Action Centre’s vision – All Manitobans living green, living well. 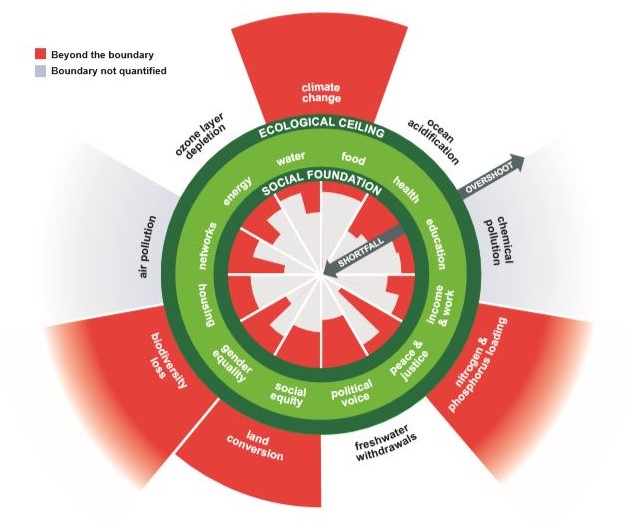 A vision without a plan is only a wish. It tells us to seek multiple goals synergistically, but it doesn’t tell us how to make it happen. We need strategic planning over five- to thirty-year time horizons to meet urgent societal and climate goals.

Manitoba Hydro and Efficiency Manitoba are key assets for Manitoba’s greener future. Manitobans already have what others strive for – a low-carbon, low-cost power supply. But, in addition, these crown agencies bring expertise in complex long-range planning, clean tech market transformation and efficient use of energy. With their help, Manitobans can cut energy demand and displace imported fossil fuels by spending energy dollars instead on home-grown electricity to heat buildings with heat pumps and fuel electric vehicles. The outcome – a cleaner, more efficient economy with positive returns for Manitoba Hydro, the provincial treasury and Manitobans.

Surprisingly, the supply of clean power and reduction of greenhouse gas emissions are not central mandates of either Manitoba Hydro or Efficiency Manitoba. APB 2020 recommends that these crown agencies be tasked with planning to meet climate mitigation targets and then implementing those plans in cooperation with others. And it funds them to do so from carbon tax revenues.

Other changes are needed as well. For example, the Province must increase its investment in public transit and support Winnipeg’s Climate Action goal to shift people from single occupancy vehicles to feet, bikes, buses and car-share.

The Province has many tools to enable and encourage a just, green transition such as leadership, education, incentives, procurement, laws and regulations, crown agency mandates, and investments in infrastructure and social programs. Budget decisions are a cornerstone of sound policy.

A green and fair budget makes it easier and more rewarding to act sustainably and costlier to act unsustainably. Green investments make it possible for Manitobans to live sustainably and flourish. Green incentives, taxes and fees encourage sustainable choices. Users and polluters should be charged for costs they impose on society, while ensuring the disadvantaged are made better off. For example, drivers of cars and trucks should pay for their share of road infrastructure, “free” parking on streets and malls, pollution, climate impacts, injuries, and other social costs they impose.

A rising carbon pollution levy (“carbon tax”) is a key climate policy, which recognizes costs of carbon pollution, makes cleaner choices and technologies more competitive, funds dividends to low and middle income families to reduce levy impacts, funds clean tech and infrastructure that enable low-carbon choices, and incents emitters to find ways to lower their dependence on fossil fuels. APB 2020 recommends that the Province replace the federal carbon tax backstop with its own compliant carbon tax that continues to rise. At $30/tonne of CO2e emissions, the tax would yield approximately $300 million in revenue. $100 million of this would more than offset the additional costs to low- and middle-income households through rebated dividends and the rest could be invested in climate mitigation measures such as deep building retrofits, heat pump subsidies, the purchase of electric buses and chargers for Winnipeg Transit, and electric vehicle rebates. These measures would create thousands of green jobs while greatly lowering the carbon footprint of Manitobans.

1. Urban sprawl is costly and unsustainable for Metro Winnipeg and other municipalities, requiring building, maintaining and operating more kilometers of water, sewer, Hydro lines, roads and bus service per person and discouraging a modal shift away from cars.

Solution: Future development should increase density, local services and active transportation and occur where public transit and infrastructure are available.

2. Exurban commuters are subsidized by Winnipeg taxpayers, who pay for streets used daily, at no cost, by commuters from neighbouring bedroom communities. This (a) lowers the tax burden on comparable exurban homes, which (b) incents exurban migration, which (c) increases commuting emissions. Further, (d) the City is pressured to limit tax increases to remain competitive (e) leading to underfunded and deteriorating infrastructure and services.

Solution: Riley Black, who provided the above analysis, proposes that Winnipeg employers be required to deduct a commuter fee from paychecks of exurban employees, thereby restoring partial user pay, adding to Winnipeg’s tax base, and reducing the Winnipeg/exurban tax differential.4

3. Car and truck owners and drivers are not charged the costs they impose on society. Such subsidies distort the real costs of driving, promote single occupancy vehicles over transit, enable urban sprawl, and distort city and provincial budgets. The City fills potholes and builds underpasses without adding a penny to the cost of driving. At the same time, bus riders experience fare increases and threatened service cuts.

Solution: A green and fair alternative would introduce mobility pricing commensurate with the social costs of vehicles by means of higher fuel, vehicle, road and parking taxes and fees to reflect user pay, polluter pay, damage and safety compensation, and a fair contribution to general revenues. If vehicle owners and drivers paid their way, this would free up general revenues for other social priorities. Get cars and trucks off welfare.

Solution: The Province should legislate the requisite municipal taxing powers, so they are not reliant on property and utility taxes to fund motor vehicle infrastructure and services.5

Solution: The Province should create a Metro Winnipeg Sustainable Transportation Authority like TransLink for greater Vancouver, Metrolinx for greater Toronto, and Société de transport de Montréal. Its mandate would be to provide sustainable, affordable public and active transportation in the Metropolitan Region. It would require mobility pricing and other powers to carry out its mandate.

A Green New Deal is within reach for Manitoba. Policies like these can make it happen. Consult APB 2020 for details and other social investments needed to realize the vision.