A New Deal for Winnipeg and transportation 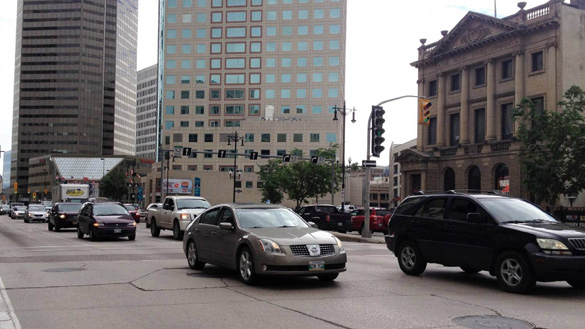 As part of the City of Winnipeg’s 2015 Budget Review process, Green Action Centre presented to both the Standing Policy Committee on Infrastructure Renewal and Public Works (March 16) and Executive Policy Committee (March 17). Check out our written submission.

You can also watch a recording of the presentation on the City of Winnipeg’s website. Scroll down the list of meetings on the right hand side to Special Meeting – Executive Policy Committee – 2015-03-17.  (Note: our presentation starts at 2:20:35 and ends at 2:32:25)

These presentations are an expansion of Green Action Centre’s recent letter to Mayor Bowman and Councillors on how to fund rapid transit in Winnipeg, and were followed by an op ed piece (below) published in the Winnipeg Free Press on March 21st.

By: Beth McKechnie and Peter Miller

Winnipeg’s budgets, including Budget 2015, are not fiscally sustainable because they rely on tapping reserves, selling assets and deferring costs to the future. We need a new deal for Winnipeg, as the Free Press recently reminded us. What should it look like?

Most suggestions focus on an abstract “structural deficit” and new revenue sources for the city. But that misses the unsustainable elephant in the room – transportation infrastructure – responsible for the most flagrant gaps between expenditures and revenues, and between the green policies of OurWinnipeg and Tomorrow-Now and current practice. We believe these two gaps can and should be closed together in a New Deal for Winnipeg and for transportation.

First let’s abandon generic talk of a structural deficit and speak of sewer and water needs and transportation needs. Sewer and water operates as a utility that balances revenues and expenditures, including financing, and contributes an eight per cent dividend to general revenues (12 per cent in the 2015 budget). It models how road transportation could work if we had “mobility pricing.”

An ever-growing gap between road costs and transportation revenues makes transportation fiscally unsustainable. Residents want potholes fixed, back lanes graded, streets plowed and swept, new bridges and underpasses built and roadways widened and extended. But our councillors have been unwilling or unable to find a way to charge drivers, as the primary users of transportation infrastructure, for these growing demands. Instead, the burden goes to property and sales taxes.

Indeed, contrary to sustainable user-pay and polluter-pay principles, cars and trucks receive multiple subsidies. First, provincial gas tax covers less than half of provincial road investments. Second, tailpipe greenhouse gases that drive enormous climate change costs in Manitoba and globally are dumped without charge into the atmosphere. Third, without PST on fuel, the purchase of gasoline (unlike most goods) makes no contribution to health, education, welfare and government services.

Finally, because property tax applies to homes, but not the cars and trucks beside them, vehicle ownership makes no contribution to city services or roads. Transit users face annual fare increases plus a Southwest Transitway surcharge in Budget 2015, yet there is no call for a road-maintenance vehicle tax or tolls collected on proposed new roads or bridges.

With transit fares rising annually, while driving goes untouched, incentives and infrastructure are increasingly stacked toward taking a car instead of a bus, directly contradicting the city and the province’s sustainable-transportation goals.

In Vancouver and Montreal, two cities noted for sustainability and public transportation commitments, drivers pay 32.17 and 33.9 cents/litre respectively of local excise, carbon and sales taxes – well over twice the 14 cents/litre in Manitoba.

As one might expect, these massive subsidies correspond with a steady climb in transportation emissions. Manitoba’s vehicle standards advisory board found between 1996 and 2006 Manitoba’s small vans and SUVs increased 88 per cent; total annual vehicle kilometres for light vehicles increased 27 per cent, the highest among all Canadian provinces. Meanwhile, as the proportion of car commuters dropped 1.3 per cent in Canada, it rose 1.4 per cent in Winnipeg — the largest increase among 35 metropolitan areas surveyed. Today roughly 40 per cent of Manitoba’s greenhouse gases, and 50 per cent of Winnipeg’s, come from transportation.

So what are the sustainable alternatives to these financial and environmental trends?

It is time we all assume our fiscal responsibility as drivers. When we fail to shoulder our share, either a greater burden is put on other revenue sources or support for public services is starved, or both. We depend on motor vehicles, but differentially. Providing huge subsidies from general revenues distorts their true costs. The net effect is we live in a more costly society than necessary and those who choose the most efficient and sustainable transportation modes subsidize those who don’t.

Both the city and province need to examine how cars and trucks can become net contributors to the budgets rather than net drains. Adding a special fare increase for transit riders is regressive socially, putting an extra burden on low-income and disabled, non-discretionary riders. And it can drive riders back to their cars, when we are trying to contain climate change, congestion reduction and cost.

While the province wrestles with its own budget problems, its best gift to Winnipeg and other municipalities could be to empower them to raise revenues from motor vehicles through measures such as a fuel tax, higher parking space assessments, car registration renewal tax, road tolls and the like in order to invest sustainably.

At the same time, Winnipeg needs to prioritize transit and active-transportation upgrades across the city in the next few years over road expansions.

Manitobans want to live greener lives and care about the world our children and grandchildren will inherit, but they need affordable, convenient and sustainable transportation options in order to do so.

The direction is clear, but getting there requires leadership, negotiation and hard work. Over to you Mayor Bowman and Premier Selinger.

Beth McKechnie and Peter Miller are members of the Green Action Centre.

Republished from the Winnipeg Free Press print edition March 21, 2015 A17