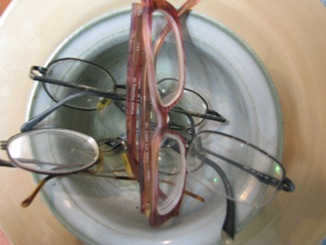 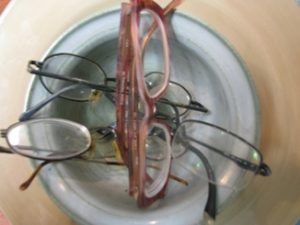 It has been a long-standing desire of mine to be more environmentally conscious, do something than the standard recycling at home or work; something easy, low impact, but helpful.

By chance, a co-worker told me about her new prescription eyewear, and wondered what could to do with the old pair. It seemed such a waste to keep them or throw them out – an issue I had, too. Remember how some places collect unwanted prescription eyewear to be used in visual programs in poorer countries, I decided maybe collecting these unneeded eyewear for reuse would be an easy way to help the environment, others, and fit in with the office restrictions.

First, I went through our office social committee, and we created the “Blind as a Bat” eye glass collections. The idea was to go with a Halloween theme event that was happening. I simply decorated a box using bits and pieces of unwanted decorations, put a sign on it, and informed my workers via email that we were collecting eyewear. At the Halloween party, we counted and there were over 36 pairs of glasses, which included 4 pairs of children’s eyewear. That week, I dropped off the bag of glasses to Lens Crafters at Polo Park, letting them know it was from my office in Selkirk.

A few weeks later, a co-worker came by and asked if I was still collecting glasses. They had just gotten new glasses and wanted to donate their old pair to recycle glass containers. Before long, I had another box by my desk labeled with a little piece of paper and, within a few months, another box was filled. This time, the total came to 34 pairs of glasses. I happily dropped them off at the Lions Club for their Knights of the Blind program.

This is now a common thing in the office. I leave the box at my desk, and glasses slowing start filling it up. Sometimes, I even get unwanted 3D glasses, which I drop off at the movie theatre whenever I can. It doesn’t seem like a lot, but I think of it this way: There are now over a 100 pairs of glasses that are not in the landfill and are helping individuals who can’t afford eye wear to continue with their education and work. Small, simple, easy and, let’s face it, kind of a lazy method of helping without even breaking a sweat. My type of recycling!

Anna Valdron is a Green Action Centre member, who works in Selkirk Manitoba.  She is currently organizing an office e-waste drive for this spring. Keep up the great work, Anna!