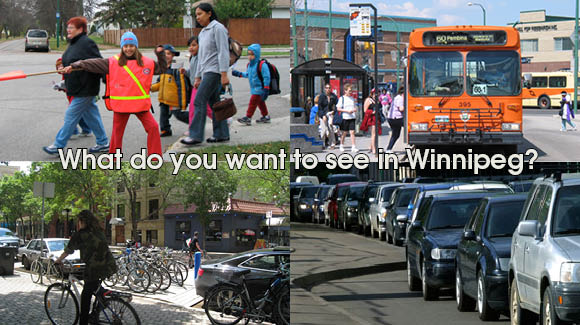 Winnipeg’s first ever Transportation Master Plan was approved by City Council on November 16. Green Action Centre anticipated good things from this Plan, which forms the vision for Winnipeg right through 2031. It represents the City’s first attempt to blend land use and transportation planning – an essential recognition of the close relationship between how a city is designed and how its residents can get around within it.

The Plan is a critical next step for Winnipeg to move away from being a city focused solely on the automobile and sprawl, to one that plans for and designs Complete Streets that provide safe and convenient access for all users – whether 8 or 80 years old, in a wheelchair or on a bicycle, in a car or on the sidewalk strolling to a nearby grocery store.

Does it achieve this?

There is a lot of good language that supports a commitment to all forms of travel and recognition that most people are multi-modal travellers – sometimes on a bus, sometimes walking or cycling, and other times in a car or taxi. There is frequent mention of the need to decrease transportation-related greenhouse gas emissions.

However, the maps and budgets included in the Plan appear to continue to focus on building new roads. Specifics are provided for “road improvement” projects, including costs and timelines, while no such plan is provided for walking and cycling (Active Transportation) facilities and only vague timelines (before / beyond 2031) are identified for rapid transit.

More than talk about GHG emissions

Success! Greenhouse gas emissions reduction has been added as a key strategic goal in the Plan. This amendment, proposed and stewarded throughout the process by Green Action Centre, was ultimately accepted by public administration through to Council. In doing so, the City has shown it must be about more than talk – it’s about setting (and achieving) a goal to reduce GHG emissions.

Not so rapid transit

Green Action Centre also supported a tightening of timelines for completion of Phase II of the southwest rapid transit corridor to the University of Manitoba and the eastern corridor. Since the City is prepared to specify completion dates in the short-term for major road projects that are currently not funded and require funding support from other levels of government, it seems reasonable to do the same for rapid transit, recognizing that the dates for any major project can be changed during the annual capital budget process.

While this amendment was also accepted, it led to an unfortunate and unintended consequence of Council passing an 25 cent transit fare increase in 2012. The idea of funding rapid transit on the backs of current transit users was proposed by Councillor Justin Swandel (St. Norbert) and squeaked through on an 8-6 vote. This flies in the face of standard budgeting processes and the fact that the City does not fund the building of roads through fees to motorists rather than from general revenues (an approach recommended by Green Action Centre).

It shows how far we still have to go in Winnipeg to recognize the value of public transit and its role in reducing emissions, congestion and the pressure to build or widen roads. If we are to create a truly sustainable city, as described in OurWinnipeg and Complete Communities, public transit will play a significant role.

More action on AT

While our proposed amendment “to develop a plan that identifies strategic improvements to the Active Transportation network and addresses critical gaps in connectivity and chokepoints, along with estimated costs and timelines” was not officially accepted, the message was well received. Green Action Centre will continue to work to ensure this happens in our capacity as a member of the City’s Active Transportation Advisory Committee.