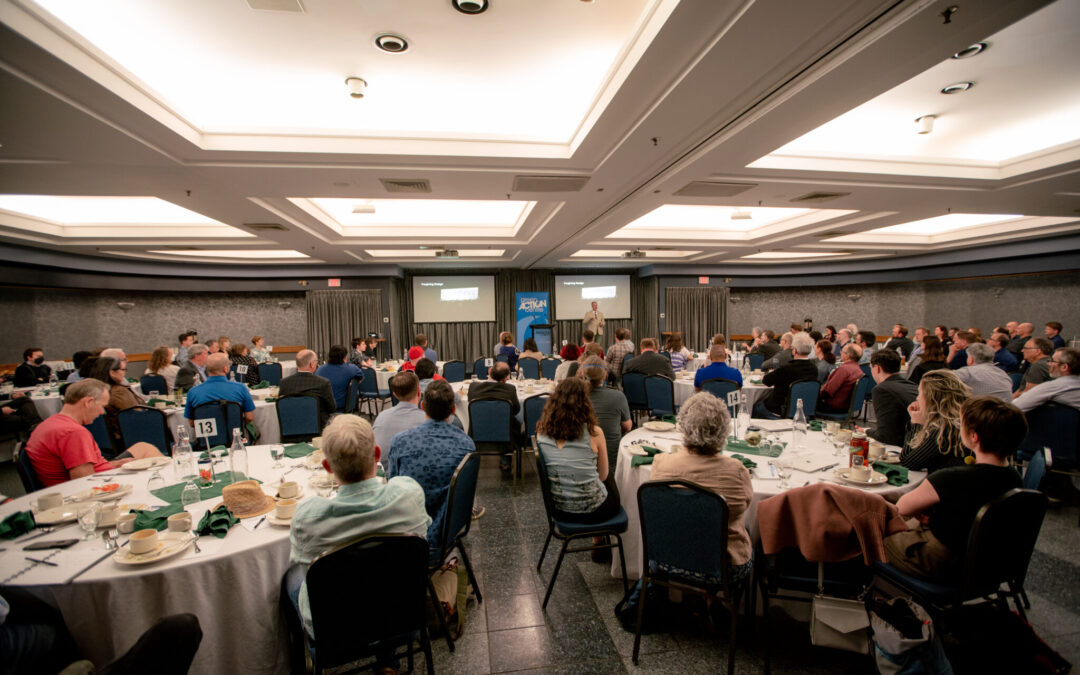 On May 24th and 25th we welcomed Charles Marohn of Strong Towns to Winnipeg for The Confessions Tour: Transportation for a Strong Town.

After being foiled by a spring blizzard in April (or the first of six Colorado Lows!), we were pleased to greet Chuck on a sunny day at The Forks where we headed off on a bus tour with event sponsors and special guests. On this ride, guests were invited to ask Chuck questions related to transportation engineering and design.

We began the tour in the North End, traveling down Selkirk and Burrows Avenues, where guests witnessed how past investments in infrastructure (sidewalks, roads, sewers etc.) have suffered from neglect as Winnipeg has expanded outwards, investing in sprawl on the city’s edge to the detriment of central neighborhoods. We discussed how even small investments from the city (for example, planting street trees), could begin to improve the function of these streets, and the comfort of those who live and work on them. Chuck also noted how making it easier for those who own properties on these streets to add gentle density would steadily improve the neighbourhood without the big risk of large development projects.

Finally, we discussed the many empty lots along the streets and how vital it is for the City to ensure these gaps are filled, since we’ve already invested in the infrastructure to serve them (the sewers, sidewalks, roads etc).

We had a stop-and-talk at Fort Rouge Station along the rapid transit Blue line, focused around the large investment Winnipeg has made in this first leg of rapid transit and the neighbouring TOD (transit oriented development) housing. Chuck observed that while the investment in transit was grand, the stops are not easy to access by the people we need to be riding it, and the development didn’t embrace the access to rapid transit. Normally, transit stops should create a place, and developments should cover the cost of the infrastructure, ensuring the city can continue to invest and improve transit. The City of Winnipeg’s current Transit Master Plan does a better job of placing transit where people already are. More details on how cities can better manage transit and land development can be found in Transit Agencies Venture into Real Estate. (TLDR: transit stops should not be surrounded by surface parking lots).

On May 25th we filled the venue at The Norwood Hotel with planners, engineers, politicians, and community leaders interested in learning more about how we can improve our transportation systems here in Manitoba.

In his book tour presentation, Chuck demonstrates how the values of engineers and other transportation professionals are applied in the design process, and how those priorities differ from the values of the general public. By showing how transportation investments are a means to an end and not an end unto themselves, Chuck reveals how the standard approach to issues like fighting congestion, addressing speeding, and designing intersections only makes transportation problems worse, at great cost in terms of both safety and resources. By contrast, the Strong Towns approach to transportation focuses on bottom-up techniques for spending less and getting higher returns, all while improving quality of life for residents of a community. 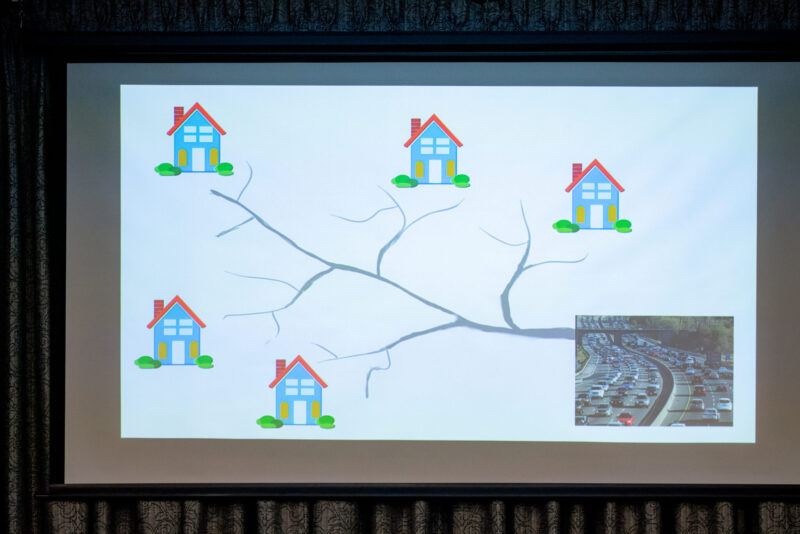 Charles begins his presentation by discussing “Hydrology 101” which all engineers are familiar with. Yet, when we substitute personal vehicles with water, we fail to comprehend the inevitable flood. Thus, we’ve burdened our cities with having to handle more “water” than they are equipped for, which has created congestion, swaths of surface parking, dangerous streets for central communities, lowering of property values etc.

How do we deal with water? We stop the flow at the source. We must do this with our transportation systems. 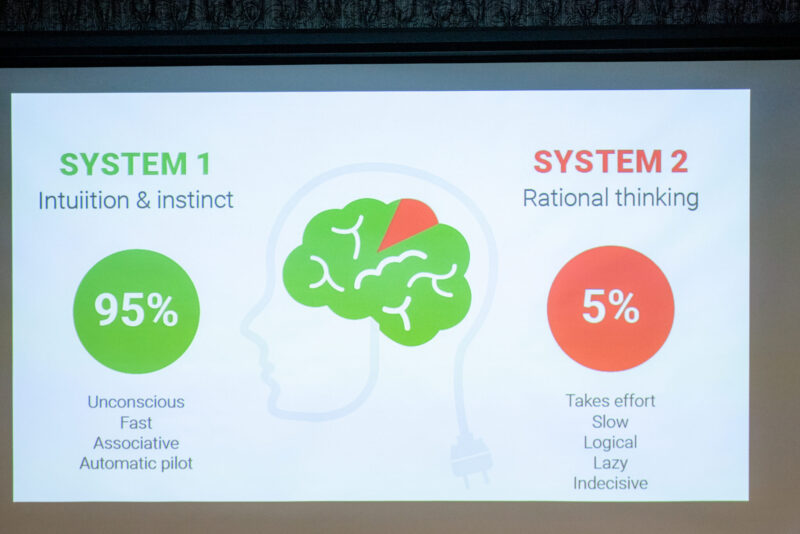 Charles stressed Thinking Fast and Slow by Daniel Kahnerman as essential reading, as its descriptions of System 1 and System 2 thinking are critical to understand. We cannot rely on telling the public to “drive safe”, which assumes driving is a System 2 activity. It is not. Driving is a System 1 activity and it has to be designed as such. More details on System Thinking is described in this video. 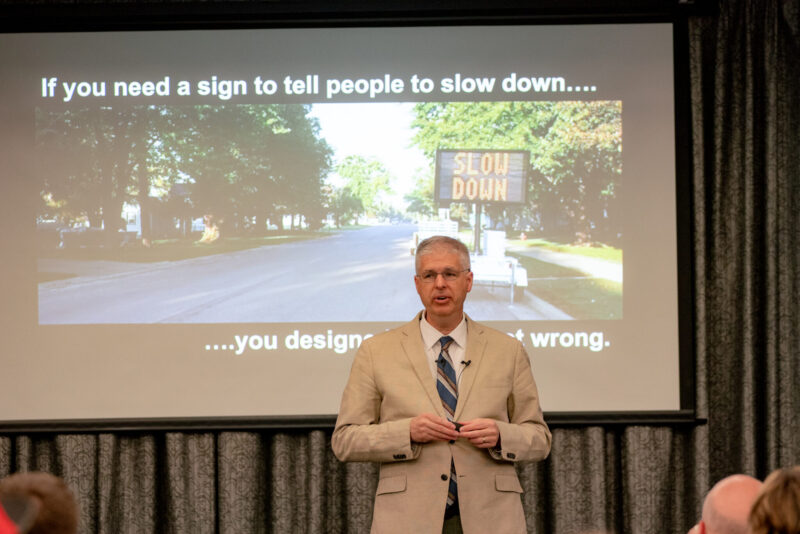 If you need a sign to tell people to slow down, you designed your street wrong.

On the street shown in the picture above, in our System 1 brains, we would drive quite fast; a wide, flat road doesn’t require the average person to think much. As cities embrace 30 KM speed limits for residential neighbourhoods, it’s essential that we don’t simply put up dozens and dozens of 30 KM speed signs. We must look at these streets and how to make them more complex, which will move drivers from System 1, to System 2: their rational minds, paying attention, prepared to react to unexpected situations, like a child chasing a ball, a person riding a bike, a senior crossing the street etc.

“Drivers should feel uncomfortable driving at speeds that are unsafe.” 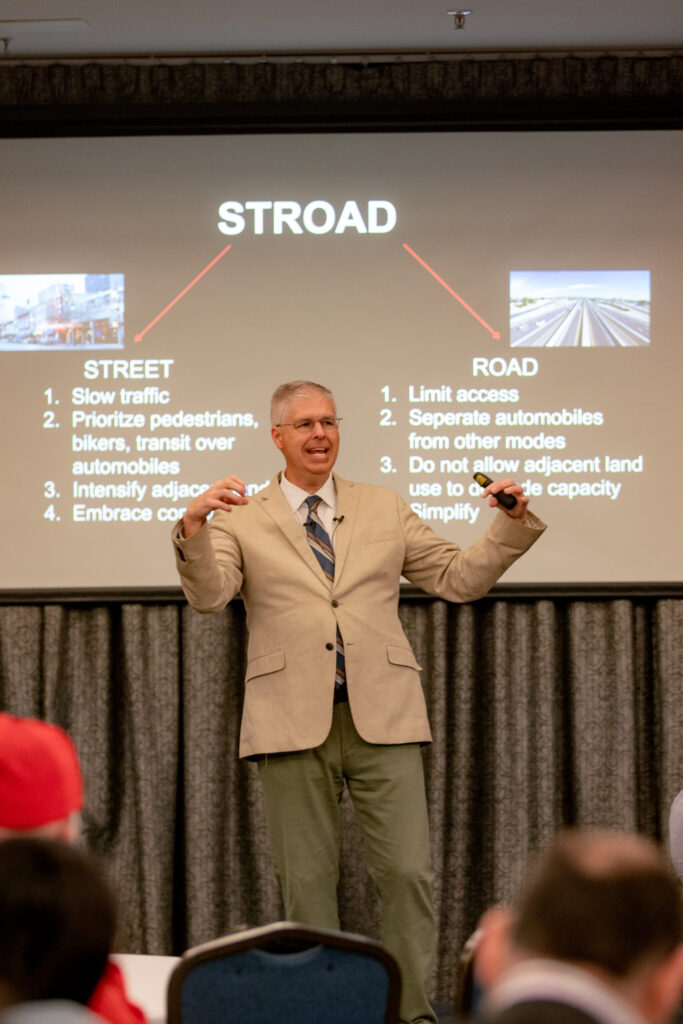 Chuck noted that Winnipeg struggles more than most cities with STROADS, as we developed substantially after the second world war as personal vehicles were more present. Thus, we’ve created a transportation network of STROADS, not streets and roads. A STROAD is the futon of transportation: an uncomfortable couch that becomes an uncomfortable bed. Equally bad at both purposes it’s supposed to serve. For more details on STROADS, check out this video by Not Just Bikes.

An important final concept of Chuck’s presentation was around values when it comes to transportation planning. Before revealing the column on the right, Chuck surveyed the room on how attendees wanted to prioritize the elements of the streets in their neighborhoods. Lo and behold, our values here in Winnipeg match every other city Charles has visited: people first would like safety to be of the highest priority, followed by the cost of the project, then the volume of traffic that will go through the neighbourhood. Speed was the lowest priority of everyone in the room.

Check out the Safe and Productive Streets campaign for more information.

Following Chuck’s presentation, we had three Breakout Sessions to connect Charles’ presentation with the local context. Thanks, everyone, for your patience. We have never had such a strong turn-out for our post-keynote breakout sessions and will ensure we have more materials and better acoustics in the future!

In this session, Michel Durand-Wood took us through examples of what ReimagineElmwood has been doing over the past few years to reclaim the streets in their neighbourhood for the people who live there. The breakout group was encouraged to provide examples of what more could be done along Henderson and Watt, and Michel provided information on how those attending could make similar projects happen in their neighbourhoods.

If you attended this session and are working on a project in your community, please keep us posted at gohappy@greenactioncentre.ca

Duane Nichol led this session which focused on the Eveline redevelopment in Selkirk, Manitoba. Duane provided context around the project, and then asked the group for their ideas on what could be done to make Eveline into more of a street, as opposed to a STROAD. At the conclusion of the session, Duane revealed the upcoming Eveline reconstruction project. Check out what is in the works!

Bridgwater: What can we still do when everything is new?

Finally, Philip Mikulec took participants through one of Winnipeg’s newest communities, Bridgwater. Like many cities, Winnipeg has been expanding its footprint rapidly and the challenges faced by Bridgewater are echoed across our province and other cities in North America. It can be difficult to have a brand new community that immediately faces conflict between what the priorities for its streets are. As noted in Bridgwater, the main street leading into the community centre is a truck route. In this case, perhaps the focus should not be on making the STROAD a street, but actually making it a road.

Overall, the importance is on having very clear expectations of what exactly the priorities are for the development before building any of the transportation elements. If we want to be a city that is less dependent on personal vehicles, not to mention financially sustainable, we must ensure that everyone, in communities old and new, can live their daily lives with ease without depending on a personal vehicle for all or most trips. Where do we put our roads, where do we put our streets, and how do we avoid the futon of transportation, the most deadly, least productive, most expensive option, the dreaded STROAD? 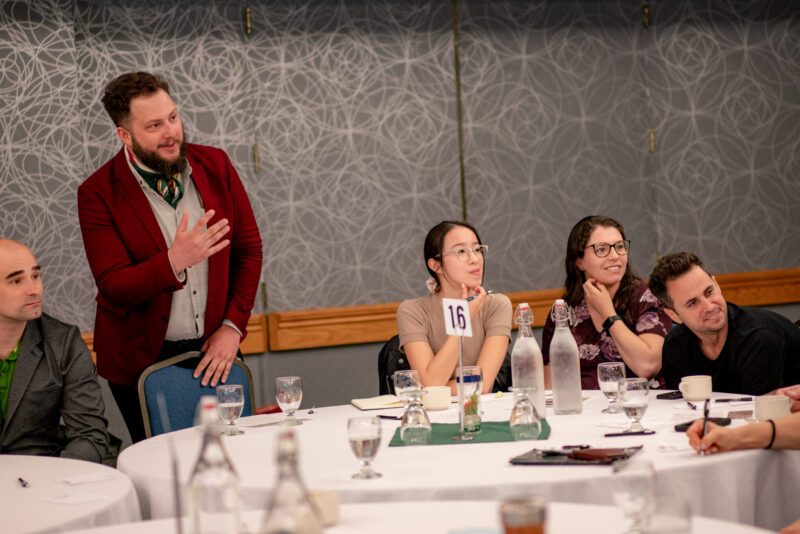