What a dream! Bike lanes on Fort and Garry streets in downtown Winnipeg that are physically separated from motorized traffic. Well, that lovely idea could soon become reality.

The City of Winnipeg is floating three options for what these streets could like like with protected bike lanes. Here at Green Action Centre we’re a fan of Option 3, which provides sufficient width for cyclists to pass each other. Given how many people use those bike lanes to commute to and from work, this would be helpful.

Check out the proposed designs for the downtown protected bike lanes and submit your thoughts through an online survey till April 1.

Another project under consideration and open for feedback till the end of the month is a protected bike lane on McDermot Ave, west of Sherbrook (starting at HSC) toward McPhillips. Note that it’s referred to as the ‘West Alexander Pacific Pedestrian and Cycling Corridor’ given it is one segment of a larger route.

Take a look at the proposed design for the protected bike lane on McDermot Ave next to HSC and throw in your two cents. Heads up! Don’t be confused by the image in Option 2 – those green strips aren’t bike lanes, they’re supposed to represent grassy boulevards. That option simply has people on bikes mixed in with the rest of traffic, which is pretty hairy in the busy block next to HSC with motorists, buses and pedestrians. Option 1 is the one that actually includes a physically separated, protected bike lane.

Not sure what protected bike lanes look like for real? While there are many variations possible, here are two rock solid examples already in Winnipeg. 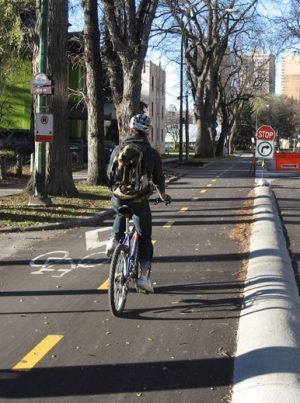 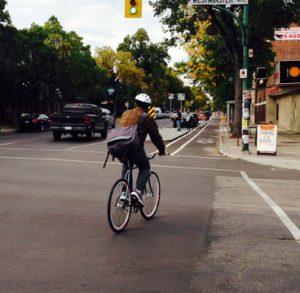