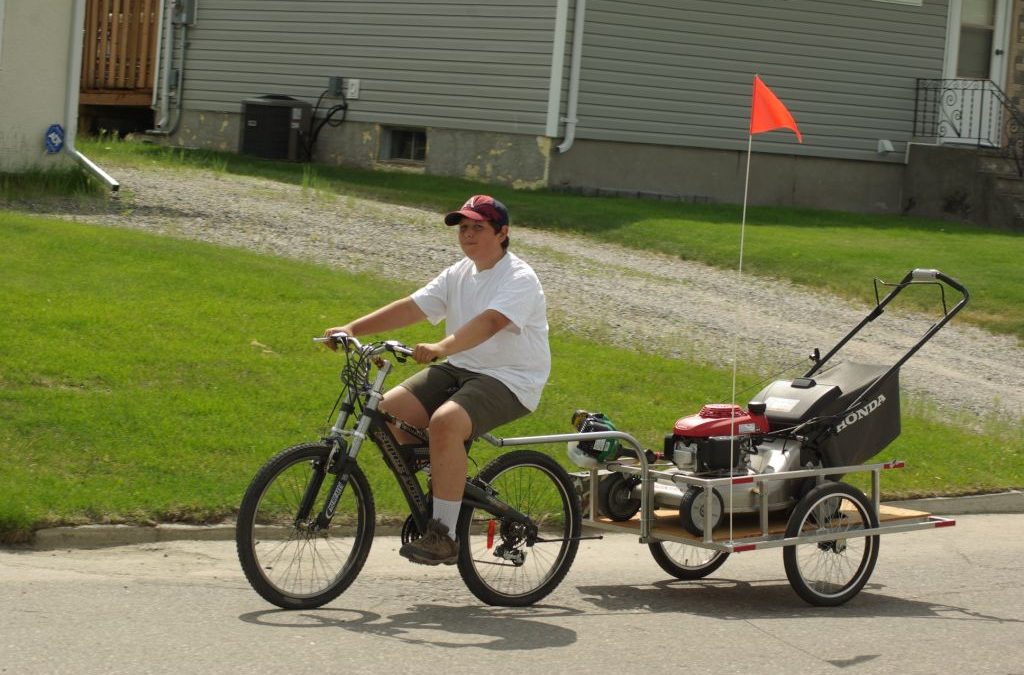 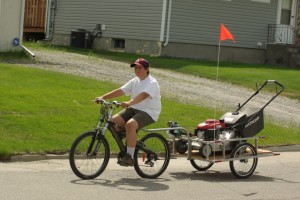 Pushing pedals and pushing a lawnmower Colin Hall is greening up the environment and the yards in Thompson. Being a little too young to take the wheel hasn’t cut in to his earning potential.  A mountain bike and a custom built trailer are all he needs to move around to the growing list of homes on his client list.

It was a conversation with his Grandfather that got the wheels turning on his little entrepreneurial venture. “Why would you work for a few dollars an hour when you could work for yourself?” he asked Colin in response to queries about where he could find a summer job. 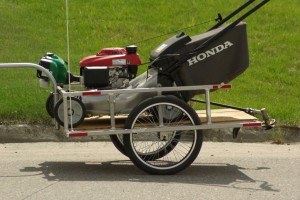 Wayne Hall is not only a businessman himself but also a handyman, so before Colin could say “can you drive me there,” Grandpa’s workshop was buzzing, and so was the kitchen table with negotiations. In the time it took to build a flat deck bicycle trailer, Grandma had signed on as the pro-bono accountant and “Colin Hall Lawn Mowing” was up and running.

His rig is right-sized to hold: a lawn mower, weed whacker and a few sundries, like bug spray, water, and a log book. When he took delivery, the shakedown cruise wasn’t just a chance to test its road-worthiness it was also an advertising stunt. Colin delivered flyers, with his equipment in tow, attracting more attention than the ice cream man.

This young peddler has secured numerous private contracts and is also doing work for a local Real-Estate agent. In peak season he is cutting 3-5 lawns a day, dependent on all the usual factors like rain, sun and invitations to things more appealing than cutting grass. Colin smiled as he explained that it isn’t all work this summer but the grass never stops growing so if he takes a day or two off, he knows the next ones will be busy.

With those full days, Colin is raking in some significant spending money for his upcoming grade 8 year. His accountant will hold all the dollars he piles up, dispersing them equally over the course of the whole year. “He’ll get a paycheck every Friday even after the grass is under a cozy blanket of snow,” said Grandma. In addition to monetary benefits, his Phys Ed. teacher will be happy to see that, at least one kid’s mobile device, was a bicycle and not phone.

Thompson is a great size for his cycle based transportation. Colin can pack up and move almost as fast as the competition, without ever gassing up, and there is enough grass around to keep him in business the entire growing season. Although with jobs as far as 4 km apart, he is thankful for a trailer that runs smooth.

Greening things up in Thompson more ways than one, the ambitious Colin Hall is a model and an inspiration for us all. 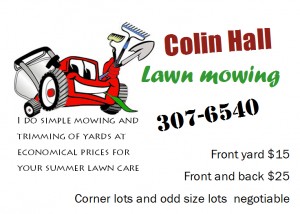