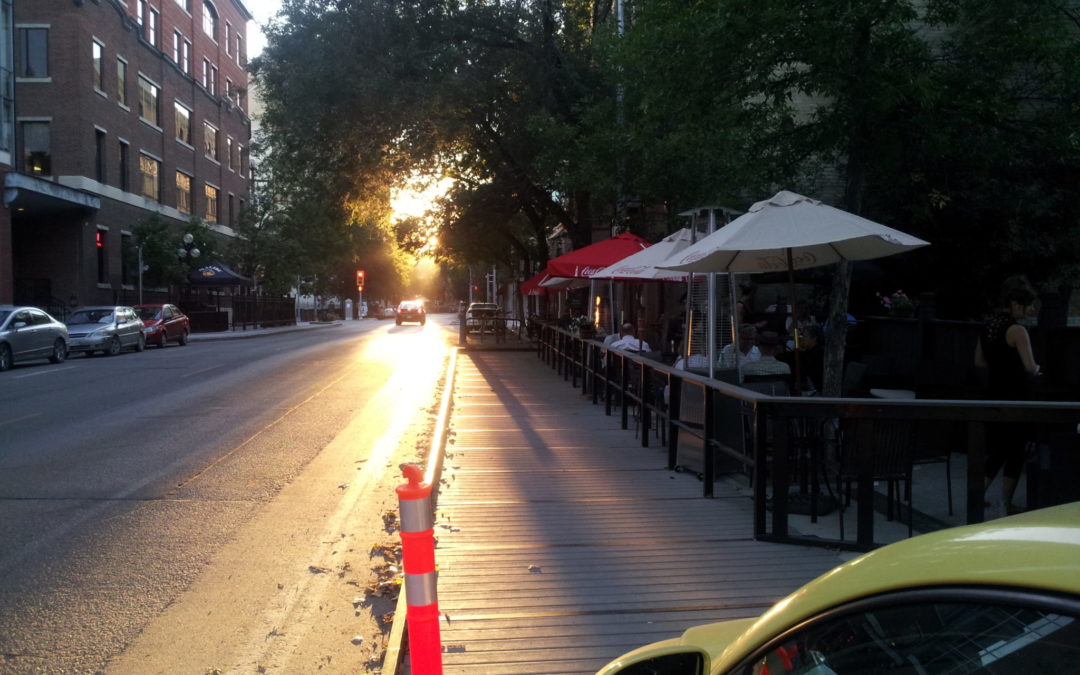 When you talk about density in any north american city, you lay your political cards on the table.

In favour: You’re a downtown elitist and/or hippie.
Against: You’re a selfish suburbanite.

But, does this have to be the case? Don’t we all want to live in places that are safe, healthy, and sustainable? How can we find some common ground?

In this debate, it’s all a matter of context and perception. If you’re in favour of density, do you instinctively believe only central neighbourhoods can achieve this? If you can’t imagine living anywhere other than the suburbs, does this mean they must be built with winding roads and zoning by-laws separating housing from schools and businesses, with fewer people per block?

Intensifying our cities is about geometry: having enough people and services in a space to make it possible to get from home, to work, school, groceries, your local community centre and other services, with ease. Consequently, services (garbage pick-up, snow clearing, utilities) are more sustainable for the city to deliver, as more people and businesses are located within a smaller amount of space.

Photo by Raphaël Biscaldi on Unsplash.

SAFETY IN SUBURBS
In the 1960s and 1970s, North American cities were undergoing a revolution. Personal wealth was increasing and new housing was going up along the edges of cities. The new housing was primarily single family occupancy with big yards, a dream for families who wanted to escape apartment living to have space for their kids to play outside in the safety of a fenced yard. The idea of safety is fundamental. Ask any suburbanite why they live in the ‘burbs, and I bet you the word “safety” will come up in the first few sentences.

But what does “safety” actually mean? Usually the perception is that areas with more people in them mean the likelihood of being a victim of a crime is higher. What this method of thinking ignores, however, are the factors which most commonly lead to injury or early death. In Canada, we are far more likely to die in a car crash, or from the results of a car-dependent lifestyle (obesity, diabetes, asthma etc), than of crime. So, while many people purchase housing in the suburbs with a high emphasis on safety, the reality is they are increasing their likelihood of injury and early death due to car-dependency.

Side note: it’s important to grasp that crime rates have dramatically decreased since the 1960s. It’s true that Canadian cities are struggling with addictions to fentanyl and meth; however, it’s so important to grasp that addiction has no borders. It’s true that in wealthier neighbourhoods, the pains of addiction can remain behind closed doors for longer (and access to credit means less likelihood of seeing addiction on the streets), but it’s quite unfair to assume building for density means increasing crime.

BUILDING BLOCKS FOR GROWTH
Reducing density and zoning away from mixed use means your home isn’t located near the grocery store, which is also not located near your kid’s school. You have to get from zone to zone multiple times a day, which increases the need for a vehicle. Car dependency is a snowball, as more personal vehicles increases the need for space in each zone for parking, which means there are more cars on the roads between, so those roads also need to grow and now you have to have a wider, longer road and the pressure to travel it quicker in order to get to the things you need, which are now further apart. And all of this travelling must still be done within the timeframe of your day.

Citizens who do want buck the trend and embrace healthy, sustainable commuting, soon discover when walking, biking, and/or busing, they are now much lower on the “priority pyramid” which places the convenience of those personal vehicles well ahead of the comfort and safety of those who want to bus, bike or walk. Why do cities make it so easy to choose the mode of travel that is the most expensive, dangerous and unsustainable?

RETROFITTING TIME
It’s time to rethink our suburbs! While cities might have made errors in zoning by-laws and parking requirements in the past, that is not to say we can’t have a healthier and greener suburban neighbourhoods in our future. Ellen Dunham-Jones delivered a fantastic TED Talk, Retrofitting Suburbia, on the incredible potential our suburbs have to grow into liveable, sustainable places. She sees:

“a tremendous opportunity to take our least-sustainable landscapes right now and convert them into more sustainable places. And in the process, what that allows us to do is to redirect a lot more of our growth back into existing communities that could use a boost, and have the infrastructure in place, instead of continuing to tear down trees and to tear up the green space out at the edges.” 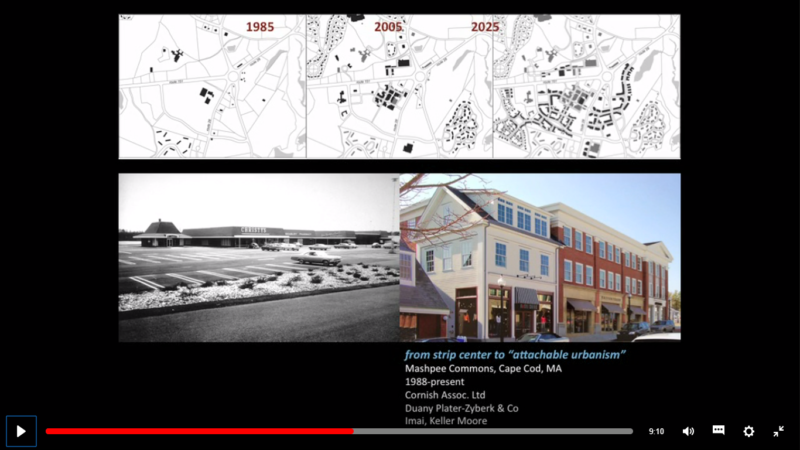 From Retrofitting Suburbia by E. Dunham-Jones.

WALKABILITY
Times are changing, and it’s important for our suburban communities to keep up with changing demographics and priorities. In Canada, fewer young people are getting their driver’s licenses and purchasing cars, while young people are reporting their desire to live in neighbourhoods where they can walk, bus and bike to work. At the same time, our aging demographic is creating demand for places to downsize to within established neighbourhoods.

“A vital issue in community is providing an easy access to the transport network for different range of community members such as; very young, old, children and disabled people. The functions that walking and walkable area can be support includes community involvement, health, meeting and gathering and recreation which has positive effects on sustainability and vice versa. Walkability is the basis of sustainable city. The same as bicycling, walking can be known as ‘green’ type of transportation which except crowding reduction and also has low level of environmental influence, energy conserving without any air and noise pollution.”

In Canada, our need to incorporate routine physical activity into our daily lives is vital. This June, Canadian children received a D+ ranking for physical activity, and almost half of Canadian adults aren’t moving enough to benefit their health. (Not so) Fun Fact: this inactivity is estimated to cost the Canadian economy 6.8 BILLION dollars in 2009! (A Common Vision for increasing physical activity and reducing sedentary living in Canada: Let’s Get Moving).

The great thing is, we don’t have to invent a new way of building to achieve successful, walkable neighbourhoods. We were building for walkability in our cities until zoning by-laws and parking requirements forced urban planning to reorganize. Think about successful strips in your home city. In Winnipeg, we have Corydon, The Exchange, Wolseley and Deer Lodge: communities built on a grid, with schools and businesses within comfortable walks, and easy access to transit. If our city requires new development to follow the same pattern, new developments will have the building blocks for walkability.

By intensifying our landscape, we will invite citizens to choose healthy modes of travel. “Urban density helps ensure that people choosing to bike to their destinations can reach shops and services needed as part of their daily lives within a reasonably bikeable distance. Those people in turn provide the loyal customers that local businesses need to ensure their viability and create local jobs,” says Mark Cohoe, Executive Director of Bike Winnipeg.

Joseph Kornelsen of Functional Transit Winnipeg highlights how difficult it will be to have a functional transit system in a sprawling city.

“Density and public transit go hand-in-hand, both reinforce the other. When there’s more stuff and people on relatively smaller parcels of land, you need a mode of transportation that moves more people with less space — you need a bus. Alternatively, when folks are traveling by bus, they are almost always going to be a pedestrian at one end of that trip and the most walkable neighbourhoods are ones where everything is close together – you need high density.”

Sprawling neighbourhoods with long walks to the bus stop, and bus routes which wind and meander around Bays and Drives, add precious time to commutes, making the bus an uninviting, inconvenient mode of transport.

But is this reality?

I was giving this some thought over the holiday break. I come from a teeny, tiny rural Manitoba town (I had FIVE kids in my class until high school, where I graduated with 15 …), and since moving to Winnipeg for school, I’ve always lived “downtown” (cue the ominous drumroll).

Here’s my observation: living in various central neighbourhoods over the last 15 years, is a lot like small-town living. You know your neighbours, you can walk to get milk, you patronize lots of small, family-style restaurants and independent shops, and you can live your daily life without a car.

I was stuck: how to make the perks of this style of living click with those who unconsciously associate central neighbourhoods with being unappealing. And then it clicked! 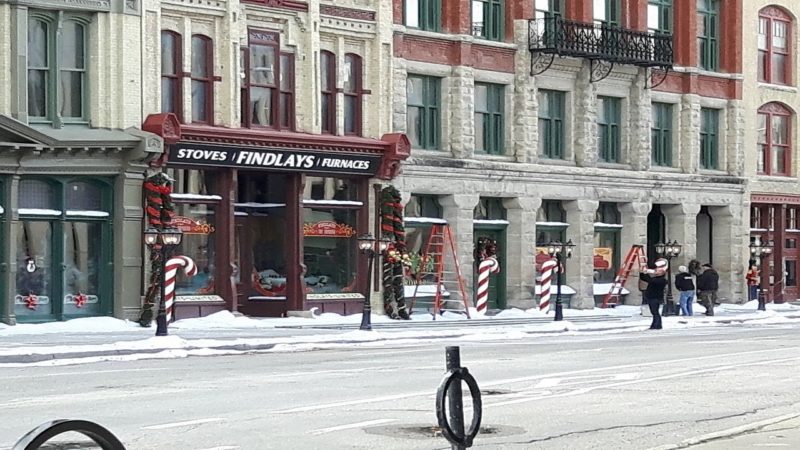 Setting up a shot for Snowed-Inn on Princess Avenue in the Exchange. Surface parking lots does not a fantasy make …

HALLMARK CHRISTMAS MOVIES!
While walking my dog around my wee (teeny tiny, super cute) small town, I realized that Winnipeg is now playing host to an ever-growing number of Christmas movies. And let’s be honest, don’t these films play into that magical fantasy of the life most people aspire to?

Where in Winnipeg do these movies typically film? Check-out the locations, and you will find dense, walkable neighbourhoods serve as the locale for whatever holiday fantasy is filming (think Westgate, Waterfront, Wolseley, the East and West Exchange).

And of course, we can’t ALL live in these neighbourhoods, but our city can require neighbourhoods being built to follow the basic building blocks of Hallmark fantasies: walkability. Storefronts, nice sidewalks, convenient transit, and opportunities to get everywhere we need to go with options beyond just personal vehicles.

The City of Winnipeg is looking to implement a Infill Strategy, and the timing couldn’t be more perfect. In Brent Bellamy’s article Winnipeg Needs An Infill-Strategy Roadmap, he notes:

Winnipeg’s residential infill strategy is a valuable initiative, but it will fall short without public support or political champions. The city is currently undertaking a comprehensive review of Winnipeg Transit service, the OurWinnipeg plan and the second phase of impact fees. This presents a unique opportunity to dovetail an infill strategy with these other policies to set Winnipeg on a progressive development path for the future.

It’s time for all Winnipeggers to engage in the discussion around density. Most importantly, it’s time to check our language and assumptions when it comes to living in the urban core and the suburbs. At the end of the day, we all want to live in a healthy, sustainable city where we can live our daily lives with ease. Let’s all work together to make it happen in every neighbourhood!