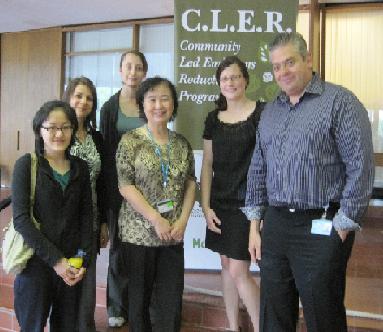 We hope to exceed these results next year!

The program was coordinated and promoted through the Community Led Emission Reduction (CLER) Program. Lindsay Hargreaves was the City Coordinator for the event. Despite the 2011 spring flood, Brandon still managed to get 12 workplaces to participate for a total of 202 participants. This represented a 500% increase over 2010 when only a mere 38 participants took part.

Lindsay attributes their success to “tons of promotion and community buy in.” The 2011 Commuter Challenge was splashed all over the local media (newspapers, radio stations, websites, Public Service Announcements and posters) to engage the community during the entire month of May.

CLER held a Lunch & Learn session to help workplace coordinators with the website and provided them with resources to engage their employees. Local businesses provided some great prizes including an airplane ride over Brandon, gift certificates for local bicycle shops, Commuter Challenge T-Shirts, local gym memberships, transit passes and more.

An Awards Luncheon was held in the foyer of City Hall for the participants. Prizes winners were selected by the amount of kilometers traveled out of each mode of sustainable travel and were presented with a prize at the luncheon celebrating our success!

The participating businesses and organizations were: