Bike licensing: worth it or not? 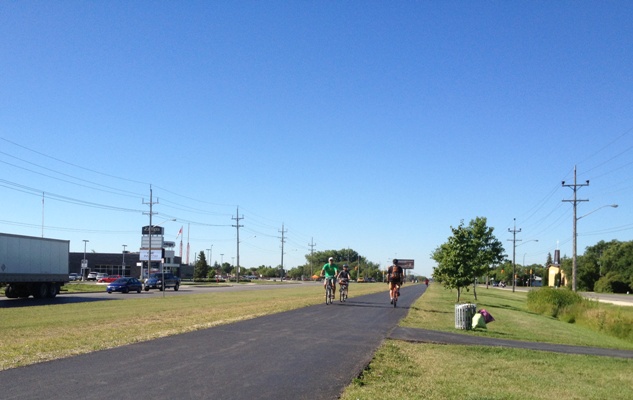 If you’re like me and cannot resist reading the comments section on news websites (Is there a therapy for this addiction?), you have probably noticed that, each time a story goes up about cycling and infrastructure, inevitably a person or two will chime in with the argument “if they want to be on the roads, they should have a license!”

Let’s examine the idea of bicycle licenses from a variety of vantage points to gauge whether it is a worthwhile endeavour for Winnipeg.

People on bikes are freeloading on the infrastructure, they haven’t paid their fair share to use it. 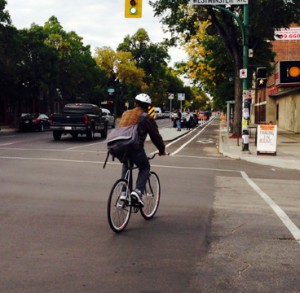 A common misunderstanding is that the funds paid to license a car pay for road repairs and upgrades, but this is not true.  Infrastructure costs are paid through taxes (income, sales and property). Currently in the city of Winnipeg, 6.7% of the city’s Master Transportation Plan is being directed to projects for pedestrians and cyclists, while 9% of people currently walk or bike as the primary mode of their daily commute. By these numbers, people who bike are actually paying a higher share of the cost to commute than those who drive.  Essentially, people who walk, bike or take transit are paying more than their fair share, while people who drive are actually being subsidized.

So, should licensing fees be used to fund active transportation strategies?

No, that is not reasonable.  If all citizens pay tax, then it is unfair to force one demographic to fundraise for infrastructure expenses on top of their taxes, while others do not.

But, how much money are we talking about here?

All of the cash made from the licensing could then pay for the bike lanes!

Cities that have imposed a licensing by-law have found that the cost to administer the program far surpassed the revenue generated. In Ottawa, for example, the city estimated that a Bike Licensing program would cost $100,000 to run, but would only generate $40,000 in fees.

So, if the city were to introduce bike licensing at a rate that would make it profitable, what would the impact be on the number of individuals who choose to travel on their bike?

The larger question here is, should cities charge those who choose to bike a licensing fee high enough to make a profit, even if it means a number of individuals would choose another mode of transportation?

To answer this question, you need to consider the full cost of commuting, and what the individual pays for each commute vs what society pays.  The folks at Moving Forward, a data analysis blog, calculated the cost of a commute in Metro Vancouver according to the various modes of transportation available.  While the numbers are obviously specific to Vancouver, we can see that the societal cost of individuals who commute by car is far higher than the cost for those who commute via mass transit, walking or biking. 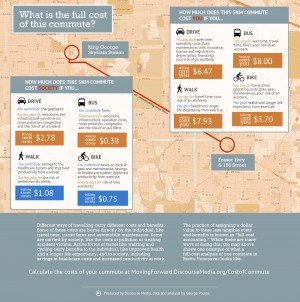 From this data, we can conclude that cities must encourage citizens to commute in healthy, active ways as opposed to creating barriers, like having to purchase a license.

Going back to the beginning of this article, I noted that 9% of Winnipeggers currently choose to bike or walk as their primary mode of transportation. However, an incredible 45% of citizens taking the same survey said they would walk or cycle more if safer infrastructure was available.  That’s a huge number of people representing a significant reduction in societal costs in the long term for commuting.

Winnipeg is approaching a population of one million, so it is clear that the city must remove barriers preventing individuals from commuting in healthy ways, and should not put an unnecessary burden on those who are already contributing more than their fair share with each commute.

We’ve had a great debate about this here at Green Action Centre! When I asked my coworkers for their feedback, one point made was that it’s unsafe to send folks with no training out onto the roads on their bike.

We all agree that education is key, and that individuals who want to try commuting on their bicycle should take a skills workshop (you can find details through Bike Winnipeg), or travel the roads with an experienced cyclist to learn the rules and practice their skills. 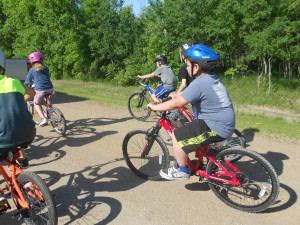 But I think we need to go further.  Safe biking workshops should also be part of the school curriculum, where children can be taught lifelong skills on how to travel safely on the roads.  Check out this video from the cycling mecca, the Netherlands, on how they prepare school age children to join the traffic on the main roads.  It’s important to note that hundreds of thousands of children cycle to school in the Netherlands each day, and many travel upwards of 15 kilometers each way. While cycling in Winnipeg is not ideal in the crux of winter, it’s important to note that our flat, prairie landscape makes Winnipeg an excellent cycling city.  Just think of the health benefits of having thousands of kids commuting actively each day, as opposed to being dropped off in a car.

With improved infrastructure, skills workshops in primary school and improved education for adult riders, we can certainly make people who bike in Winnipeg safer.  Do we need to have a licensing fee to make this happen? No, we don’t.

After examining the bike licensing issue from several angles, it does not appear to be a good use of time and resources on the part of the City of Winnipeg.  Instead, we see that supporting active and healthy means of transportation for citizens in all corners of Winnipeg is the best and most cost effective way to ensure our city becomes a hub for modern, sustainable commuting.

Now, we just need to disseminate this information to all of those news commentators!