2012 Jack Frost Challenge Results Are In! 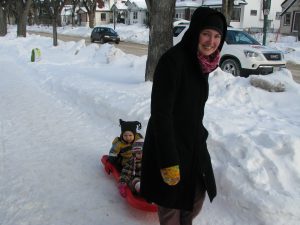 The week of February 11-17 brought (mostly) beautiful winter weather and Manitobans took full advantage of it, getting outside for Bougeons en hiver: The Jack Frost Challenge! Teams of 1-5 people strapped on their skates, skis or snowshoes, jumped on their bicycles or pulled on their boots or running shoes with the goal of amassing a combined total of 130 km of self-propelled outdoor activity during the week.

Plus, we’ve heard some great stories! It seems that the competitive spirit is alive and well in Manitoba, with friends and co-workers spurring each other on to reach the goal. One workplace amassed km by taking a hardworking service dog out for lunch time walks. Others made it their goal to use five modes over the course of the week, even trying out winter cycling for the first time. One workplace created a logo and poster, and took photos of themselves out skating and skiing. What great spirit!

As well, seven people completed the 130 km as a team of one!

We would be remiss if we didn’t share some of the fun and clever team names: The Fast and the Flurriest, Frosty Five, Plodding Bison, West Coast Snow Convert, WestEnd Winter Woolies, FrostBeards, Slush Puppies and Cold Fronts, to name a few.

And last but certainly not least, draw prize winners were:

SUN DAWGS – Manitoba in motion gear and locally made mitts

Thanks to our sponsor, Manitoba in motion, and to Leif Norman for the great photo of our hardy winter cyclist. And thanks to all of you who celebrated winter with us! We look forward to doing it again next year! If you had fun with Bougeons en hiver: The Jack Frost Challenge, check out the Commuter Challenge, held in the week of June 3-9!