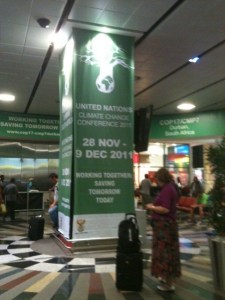 The United Nations Climate Change Conference in Durban, South Africa begins today and will host thousands of delegates including me for two weeks. I arrived about 48 hours ago in Durban, after a 56-hour trip half around the world to the Southern hemisphere. The Canadian Youth Delegation is sharing the hostel with youth delegates from New Zealand, the United Kingdom, and a few cockroaches. A lousy internet connection, chronic tiredness, tourists blasting music, and rainy weather have been shaping my first 48 hours.

Durban’s International Convention Centre has been declared a United Nations zone with the area around it being completely closed to traffic. The zone also includes a Climate Change Response EXPO (an exhibition of South African greening initiatives), free shuttle buses and bikes for all delegates to get to the conference and back.

Climate Action Network International brought civil society members from all over the world together to sign on to a list of concrete demands to make this a successful COP, not some fuzzy “political commitment”. A positive outcome in Durban would include a second commitment period of the Kyoto Protocol, securing a mandate to negotiate a legally-binding agreement no later than 2015, and the implementation of the Green Climate Fund.

Canada has already been singled out by Civil Society groups as one of the countries trying to obstruct progress during the negotiations. So the tasks of monitors from Canada, like me, are all the more difficult.

Regardless of a few difficulties at the beginning, I am absolutely thrilled to be part of an amazing group of youth from all over the world to learn from each other, collaborate and work together towards a better future for our generation.

Anika Terton, Canadian Youth Delegate to COP17 from Winnipeg, Manitoba, will be blogging from the COP 17 meeting in South Africa for Living Green, Living Well at Green Action Centre. Read her other posts at: Green Action in Durban