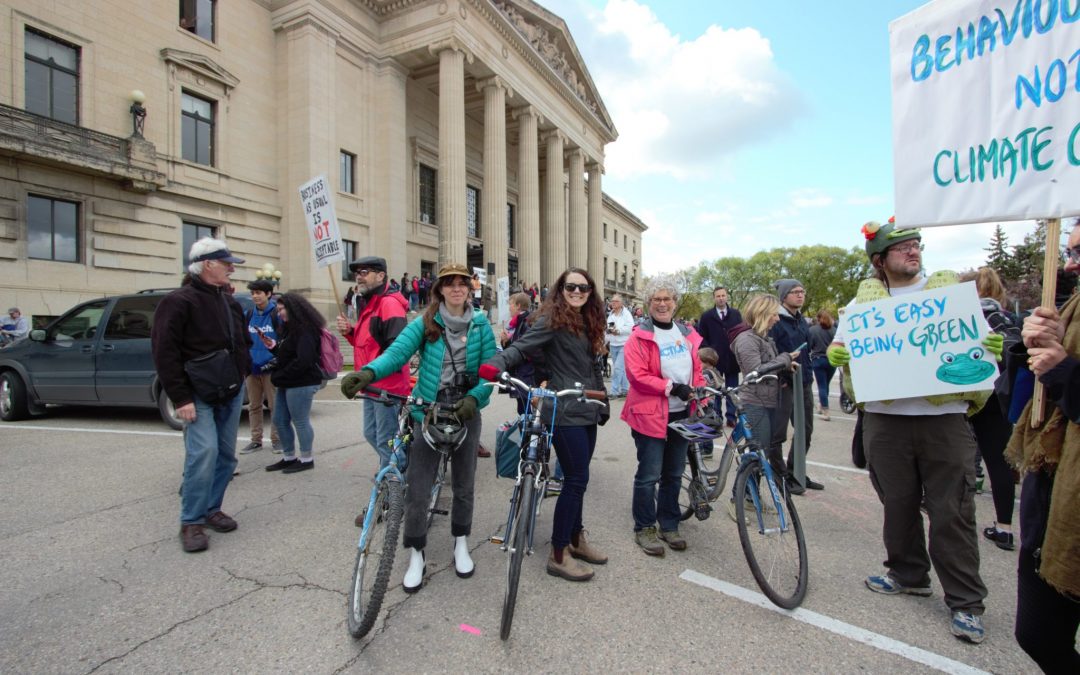 On Friday, September 27th, Green Action Centre employees took to the streets to strike for climate. We gathered at the Manitoba Legislative with approximately 12,000 others, ready to march for climate action.

Here are the takeaways from a few of our staff in attendance:

The climate crisis for too long has fallen off the priority list, but that cannot happen now. Our leaders need to see that this is an important issue, and people also need to find solidarity and motivation to continue with what will be a difficult campaign. What I observed at the strike was honesty, determination, and anger. It was heartbreaking for me to overhear 16-year olds talking about how we only have 8 or so years before our carbon budget is depleted and things go rapidly downhill. I think it’s really unfair and inappropriate that children and youth are taking on these very adult responsibilities because they see and understand that change isn’t happening fast enough. Youth are inspiring, and are changing the world. “Kids these days” are brilliant, well-spoken, and compassionate, and we need to continue standing behind them. Going forward, we require space continuously being made for these conversations. Even people who are concerned don’t know what to do, and also need to voice their fears and frustrations. Please continue bringing up the climate crisis in situations where it hasn’t historically been addressed; our leaders need to also know that taking necessary action won’t get them voted out of office.

What I loved most about the climate strike was the energy. People there were serious about what they were standing up for, and I could feel a range of emotions around me. There was sadness (at what we’ve lost), anger (at current inaction), and despair and fear (about things to come). But there was also hope (at what we can do), ambition, unity and a sense of collective purpose. The demographics of strikers spoke volumes – all ages, genders, religions, and ethnicities.

And I had a BLAST! In fact, I had to put myself in check – the strike was not a party, nor an excuse for a good time (though skipping work was fun!). We were there to put public pressure on the powers that be to put the climate crisis at the top of their list. But still, I had sooo much fun! I also loved reading all the signs (even the NSFW ones lol). I was thoroughly impressed with the organizing that went into this by Manitoba’s Youth, activists, and strikers.

I have been to many of the youth climate strikes and have watched the youth protest through ice, snow, rain, and the occasional sunny day. Each strike has continued to build momentum, as it started with tens, then hundreds, and now, thousands. It has been so important for me to be present at these strikes, helping to support the youth and spread their message. I have been fortunate to watch the progression of this movement and was thrilled to finally have the opportunity to walk alongside them in the general strike.

As I walked among thousands of passionate people, of all ages, I observed the range of emotions on display. Many were angry, some were sad, but overall, I saw hope. The power of numbers can do that.

Going forward, I hope that the success of the general climate strike will have an impact on politicians, policy, and governments to take necessary and decisive climate action. If that action is slower than required, I am prepared to continue showing up to protests, advocating for change, and taking steps to minimize my own environmental impact wherever possible. I hope everyone who attended the strike or was #nottherestillcare is prepared to do the same.

Kristen Malec, Composting
I was at the General Climate Strike because there is not nearly enough being done to combat climate change, so I felt like I needed to speak up for both my future and my daughters’. I found it to be very inspiring, especially, the fact that I was able to bring my 2-year-old daughter, Hannah. It was incredible to see the diverse ages of people supporting the movement, as it is so important for adults to be standing alongside the youth in a crisis that will affect us all.
Although I care about the negative impacts that will be experienced across the world, what really drives me, is my daughter. I am always thinking about what her world will be like when she is my age, and I want to ensure she has the best future possible.

The momentum of the youth climate movement is incredible. I was overwhelmed by the sheer number of people in attendance, there was great representation by youth as well as a significant number of adults. I know of several other businesses that made a commitment to close their doors in support of the strike; it sends an important message and I want to send a shout of thanks to all the businesses that participated.
It was empowering walking alongside our staff and with our signs, and I felt even more grateful that my daughter chose to be there with us.  Moving forward, we need to ensure that climate change remains a topic of focus for everyone, and moves to the top of the list of priority issues for government and businesses to address. We cannot let this burden fall on the shoulder’s of our youth – Green Action Centre will remain vigilant in our work to engage, educate and empower Manitobans to take climate action and to live more sustainably in their day to day lives.