The Compost Courier Diaries Episode 2: The Birds and the Bees

Fall is well under way, and if yer like me, you’ve noticed. Not just the trees and stuff, but the birds! Being out on the road all day exposes us compost couriers to a hecka lot of birds. Winnipeg is a great spot to watch migrating birds, thanks in part to the Red River and what’s left of our urban forests and wetlands. The last few weeks have had me remembering all the amazing birds we saw this year at Compost Winnipeg…

We take the vast amount of the compost we collect out to an industrial compost facility that is just outside of the perimeter. This site has tons of birds, and since it’s out of town, and our pick up routes are in town, we get to see birds in many different eco systems – urban, suburban, field, forest, and wetland. It certainly helps that we pick up compost from Fort Whyte Alive! (so ya know we’ve seen a bazillion Canada Geese).

Here’s a shot of some Yellow Headed Blackbirds getting excited about a fresh delivery of compost! This one is wondering how to get through the compostable liners we collect in… 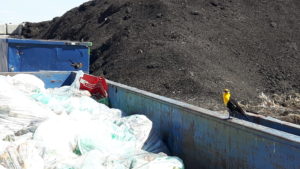 Yellow headed blackbirds excited for the compost feast they are about to take part in. 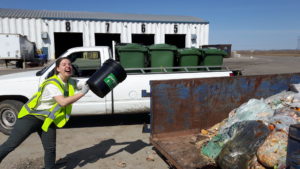 At the compost site, Sara loves tossing organic matter into the pile… Lift with your back!

Those little birdies have Compost Courier Sara to thank for that!

Vicki (seen in our last episode getting new steel toed kicks) is our resident animal whisperer and has had experience with both birds and bees. Once she came across this huge bumblebee. She rescued it. It wasn’t moving much and wouldn’t fly. We build it a little habitat and took it out on the run with us. We named it Bee (look we got a lot of compost to move, we ain’t got no time for naming sessions).

I didn’t have the heart to tell her that by taking the bee with us we probably just drove it far from its home. I think it was on its last legs anyway. Sad. But Karma always wins, so a few weeks later Vicki got stung by a wasp that was eating our compost! 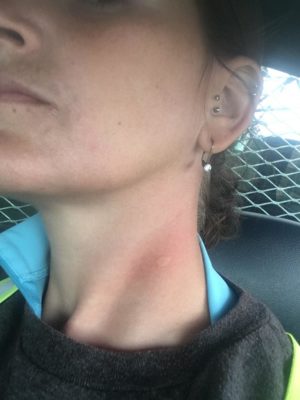 Vicki’s wasp sting. There is debate on whether or not she deserved it.

She was not happy about. She shoulda just left it alone. Bees and Wasps are different, but I bet they got each others back.

Then this other time Vicki was doing her route in Wolseley, when she was waved down by some random citizen. (Note, compost couriers are like heros to many people so we get flagged down a lot). They had found an injured Rose Breasted Grosbeak. It couldn’t fly and seemed to have a broken wing. Which created symptoms of a broken heart within Vicki. Placing the bird carefully in a box, she delivered it to a local bird rescue and it lived to fly again! But here’s the thing, she originally called me about the bird and asked she should bring it. I was kinda aloof about it and told her that nature was just doing its thing and she shouldn’t worry about it. What a jerk I was that day. But once again, the rules of Karma kicked in. The next day I was pooed on by a pigeon. 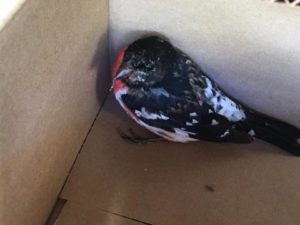 And lastly on the topic of the birds and the bees…

In the first episode of the Compost Courier Diaries we learned a little about sow beetles, a prominent primary consumer in a compost pile. This time we will talk briefly about some of the secondary consumers. This group eats the primary consumers (dead or alive). They also eat the poop of the Primary Consumers. Secondary Consumers include springtails, some types of mites, feather-winged beetles, nematodes, protozoa, rotifera, soil flatworms. You’re probably wondering what this has to do with the birds and the bees. Apparently very little! You see, many of these organisms reproduce through Parthenogenesis. That means they don’t reproduce sexually. Lol.

If you missed the last episode in which George Strait makes a special appearance, click here!

Sign up for home or office pick up and join the growing composting community in Winnipeg. We’ll be happy to add you to our daily adventures! Visit www.CompostWinnipeg.ca for more info.