Concerns about bottled water are based on myths, according to the Director of Corporate Affairs at one of Canada’s largest bottled water companies. Nestlé Canada’s John B. Challinor II wrote in the Letters section of the Winnipeg Free Press that “Health Canada regulations for bottled water must be as strong and protective of public health as provincial regulations for tap water” (italics added). Perhaps he meant to write, they should be as strong, for he would be incorrect to state that they are equally stringent. 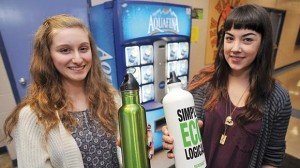 Moreover, while municipal tap water in communities like Winnipeg is monitored in real time on an hourly basis, bottled water is sampled only on a per lot basis, as little as once per day. Winnipeg tests for over 60 different parameters. Federal regulations require only a few of these.

Although occasional contamination readings from municipal sites do occur, these are publicly reported. We know for example that in 2009, there were 7 incidents of high coliform counts in Winnipeg out of more than 3000 tests. In these cases, follow up action was taken and the problem resolved. I would challenge Nestlé or other private water providers to make their test results public.

The bottled water industry often tries to absolve itself by pointing out that it is responsible for producing only a small percentage of unrecovered waste. This is a red herring. At a time when we all need to start thinking of ways to reduce our ecological footprint, bottled water is an extravagant and unnecessary use of resources where safe, public, water is available. The production of over one billion bottles of water each year in Canada consumes over 1.5 million barrels of oil.  Water bottles are a highly visible part of our waste stream. Despite efforts of the Canadian beverage industry to launch an outdoor recycling program, Manitoba has one of the lowest rates of beverage recycling in the country.

As Canada Water Week approaches, we should celebrate Manitoba communities like Altona and Dauphin and that have led the way in restricting the sale of bottled water in their public facilities. Thanks to local activists like David Jacks (Canadian Federation of Students), Manitoba’s universities have been among the first in the country to adopt bottled water bans. We should also recognize the efforts of places like Brandon that have invested in improving their public water fountains or Winnipeg Water and Waste which last year opened a new water treatment facility to deliver some best public drinking water in North America. These are the first steps in ensuring that public water will be safe and available for future generations.