Your guide to navigating Rapid Transit in Winnipeg 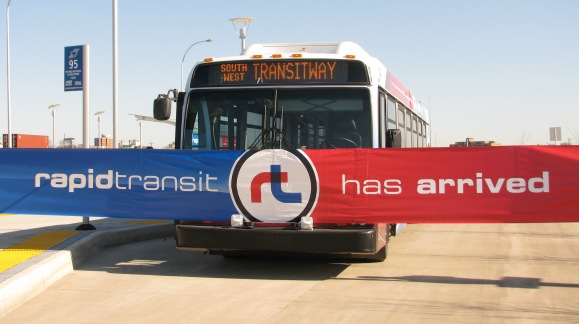 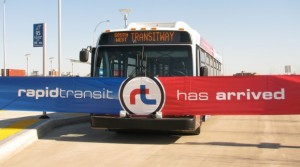 It’s here!  The 3.6 kilometre stretch of the Southwest Transitway is now open, allowing riders to travel from downtown to Pembina and Jubilee, bypassing traffic at Osborne and Pembina Highway. This project has been 36 years in the making and Green Action Centre is very excited to see it arrive.

For those eager to try out the new route, it is important to also note is that there are changes to 18 existing bus schedules and the creation of some new ones as well. Ten bus services will use the new route including a new bus No. 185 Express that will loop through Osborne Village and travel to the University of Manitoba, thereby reducing the capacity stress on the No. 60 bus.

Three other bus routes will use the line from Queen Elizabeth Way to Warsaw Avenue before exiting to Charleswood and Lindenwoods. Another four routes are being modified to connect to the line and a new No. 99 bus will run from downtown to Osborne Village to replace the routes that shifted to the transitway.

New stations are placed at Harkness, Osborne Street and Morley Avenue in Fort Rouge, plus a Balmoral Street terminus on the University of Winnipeg campus.

For cyclists, new bike stations have also been placed at stops including 8 enclosed lockers at Fort Rouge and 4 each at Harkness and Osborne Stations. Please bring your own locks but also note that Winnipeg Transit is developing a locker maintenance schedule that will result in removal of locks left too long.

New bike and pedestrian pathways have been upgraded and added. For a detailed map of the Active Transportation Pathways, please click here. For more details about service and schedule changes, please see the Winnipeg Transit- Rapid Transit page. More  information about the opening of the Rapid Transit line can be found in the Winnipeg Free Press article here.

Also, for those still having trouble figuring out how to open the back door on the bus, our Exiting the Back Door blog is here to help!