Time for Safe Speeds in Winnipeg 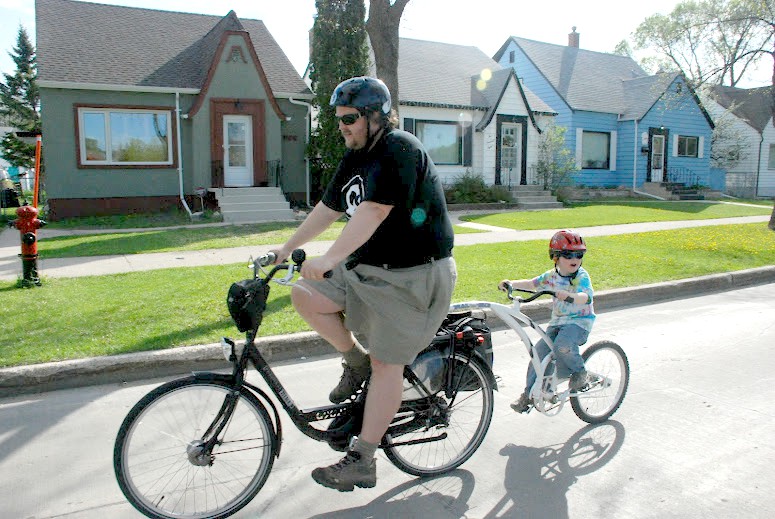 the prospect of reducing speed limits has surfaced in Winnipeg

Changes to the provincial Highway and Traffic Act has made local speed limits the responsibility of the City. This is an chance for Winnipeg to shine! We have the opportunity for slower, safer speeds.

City Council will be making a decision about speed limits in Winnipeg by September 1.

If you would like to support 30km/h speed limits on residential streets, please visit the Safe Speeds WPG website to take action on getting safe speed limits in Winnipeg.
Sign the petition
Cities worldwide are adopting principles of Vision Zero, working towards zero traffic deaths and making healthy transportation more accessible. A big part of this is a safe standard of 30 kph (or 20 mph) limit on residential streets, supported by the World Health Organization and the International Transport Forum.

“A safe speed on roads with possible conflicts between cars and pedestrians, cyclists or other vulnerable road users is 30 km/h.” – World Health Organization, “Managing Speed”

30 km/h is a speed at which different modes of transport can mingle and be more or less safe: if a driver collides with a pedestrian at 50 km/h, they are almost certain to be killed. At 30 km/h, they are likely to have only a minor injury. Slower speeds is a crucial way to reduce risk and increase comfort in areas where children are expected to be playing in the streets, or where speeds are a barrier to people cycling more often.

If we look to countries with high walking and cycling rates, like the Netherlands, where 70% of urban roads are limited to 30 km/h, calm 30 km/h residential streets allow people driving, cycling, and walking to coexist peacefully where separate infrastructure is impractical.

“Where motorised vehicles and vulnerable road users share the same space, such as in residential areas, 30 km/h is the recommended maximum.”– International Transport Forum (OECD), “Speed and Crash Risk” 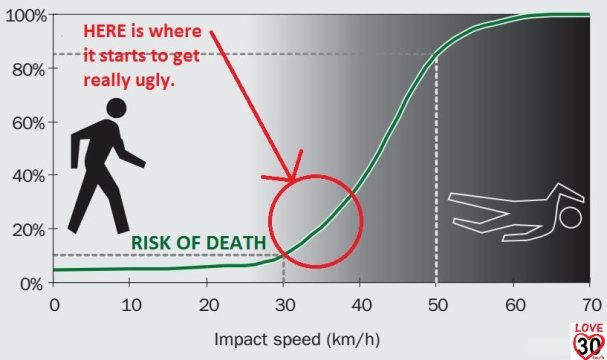 Despite the safety and health benefits, lowering speeds is a contentious issue in Winnipeg and other places where this idea is still novel, and there are some crucial misunderstandings about how lower speeds may impact car travel. To help out, we’ve busted some common myths about 30 km/h residential speed limits:
Myth #1: Lower speed limits don’t work in Winnipeg

Everyone idealizes the roads in the Netherlands, Sweden and Germany. But there are lots of other cities where residential speeds have been reduced to 30 km/h, or the equivalent 20 mph.

Myth #2: It will have huge negative impacts on traffic.

Truth: Traffic impacts will be minimal, and potentially even positive

Arterial Streets (e.g. Portage, Main, Regent, St. Mary’s, McPhillips, Kenaston) will not be affected by lower speed limits. Residential streets are those where people typically wouldn’t drive through unless they lived in the neighbourhood, or were visiting someone who did. Reduced residential speeds will add only seconds to a commute because they comprise only small portion of any trip.

Even so, that’s not the whole story: reduced residential speeds will dramatically increase the number of streets where it is safe and pleasant to walk and cycle, which can actually reduce the traffic on arterial roads. We have lots of room to make this change.

Of the 8 largest Canadian cities, Winnipeg has the highest rate of downtown commuters who drive less than 5km to work – 72.2% (StatsCan). This number drops to 24.9% in Toronto. Reduced speed limits give people safe and pleasant cycling and walking routes, providing an alternative to vehicle trips.

Traffic has changed in recent decades

There are more vehicles on the road than there used to be. Traffic volumes and speeds have changed significantly over time, caused by urban sprawl and a rise in dual-income families. Increased traffic on roads poses the biggest threat to people outside of cars, notably children. In places with large amounts of calmed 30 km/h streets — think the Netherlands, Belgium, and Finland — it is still common for even young children to play in the streets and cycle independently. In fact, in the city of Odense, Denmark (population 200,000), official city policy is that “routes to schools should be sufficiently safe for those aged six or older to cycle along if the family chooses” (The Guardian).

In Winnipeg, allowing a 6-year old to cycle to school unattended would likely be perceived as neglectful and reckless, which shows that we don’t actually think our streets are all that safe. Unfortunately we have responded to safety concerns by pulling children from the street rather than making the streets safe. The places that chose to change the street environment are now reaping the benefits of a happier, healthier, and less car-dependent population, in addition to a memorable childhood full of adventure and exploration.

Myth #3: Lower speed limits won’t have an impact on collisions.

“Every 1% increase in average speed results in a 2% increase in all injury crashes, a 3% rise in fatal and severe crashes and 4% more fatal crashes” (International Transportation Forum). This is why the OECD International Transport Forum recommends 30 km/h speed limits in urban areas where vehicles share space with vulnerable road users (e.g. people riding bikes, children).

We also know through our Active and Safe Routes to School Program that traffic concerns are a strong deterrent for parents to allow their children to walk and bike/wheel to school. If families aren’t confident in the safety of their streets, most caregivers with the option end up driving children to their destinations. This leads to a vicious cycle in which fewer and fewer children are present in streets; with less kids we no longer take for granted that children should be playing and exploring outside, and we see less justification for measures that would make them safer.

Canadian children are among the most sedentary in the world. This means our children are at high risk of preventable physical and mental health problems. Essentially, taking children out of the street environment, we have changed the threat. Instead of being menaced by vehicles, they are being menaced by chronic disease. In order to reverse the trend of children being driven everywhere, and allow for the kind of free play that they need for their development, we need child-friendly streets, which includes lower speeds and other traffic calming measures.

“Fear of traffic can affect peoples’ quality of life and the needs of vulnerable road users must be fully taken into account in order to further encourage these modes of travel and improve their safety.” – UK Department for Transport, “Setting local speed limits”

Myth #4: Speed limit changes and infrastructure will cost too much

Lowering the speed limit is only part of the puzzle. Changing driving behaviours also requires measures to reduce traffic volumes and speeds based on road design.

Even now, there are pockets of residential streets that are more conducive to slower speeds due to characteristics like narrow roadways and a mature tree canopy, which act to calm traffic.

Traffic calming doesn’t need to be prohibitively expensive; there are quick-build methods of traffic calming that can be rolled out cheaply (e.g. staggered parking, simple poles, and curb bumpouts). 30 km/h residential speed limits aren’t a new concept, which means that we can take ideas that have worked elsewhere. Janette Sadik-Khan, who is credited with New York City’s major cycling and pedestrianization revitalization, put it best: there’s no patent on pavement. Good ideas can and should be stolen! We just need to decide to take action on enabling safe, healthy transportation.

If we do not address the urgent need to shift people to healthier forms of transportation, we will continue to be burdened with the many social, health, and economic problems resulting from unsafe streets and vehicle dependence. We can’t afford the consequences of the status quo. Safe speeds will lower health care costs, save billions on infrastructure, and lead to a happier, healthier population.

“We envision a city where all children and youth have the opportunity to walk, bike or roll to school safely and, at times, independently… The streets in Winnipeg are unsafe for children to travel to school or to their friends’ houses or other activities because of high speeds (and) high volumes of cars on those roads.” – Denae Penner, Green Action Centre Active and Safe Routes to School, Winnipeg Free Press

Europe’s most liveable city? The secret of Odense’s post-industrial revolution – The Guardian