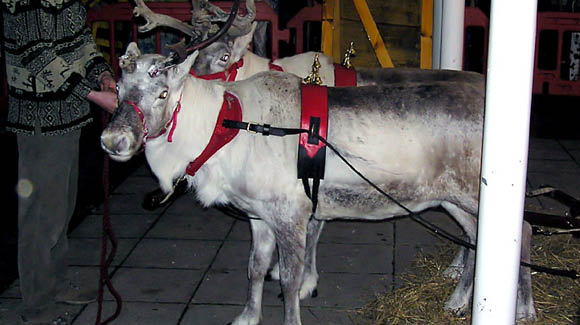 Canadians could achieve major greenhouse gas reductions by switching to flying reindeer as a regular mode of transportation, according to a study by Green Action Centre.

By choosing a team of nine reindeer to pull his sleigh, Green Action Centre calculates that Santa Claus reduces greenhouse gas emissions by more than 99 per cent, compared to a single-occupant vehicle. The group tallied the Christmas Eve greenhouse gas emissions produced by nine flying reindeer compared to those from a fuel-efficient new model van.

“By choosing an eco-friendly form of transportation, Santa not only cuts his emissions, he saves over 52 thousand dollars ensuring that everyone on his list gets the gift they deserve,” explains Amanda Kinden, Director of Ungulate Aviation at Green Action Centre.

In the course of 12 Christmas Eve circuits around the world, St. Nick travels 480,096 kilometers. Using a van for the journey would consume 57,852 litres of fuel, produce 138 tonnes of carbon dioxide, and cost $57988, including new winter tires.

The reindeer team travels the same distance on 13 large bales of hay (91 tonnes) at a cost of $5049, and produces just seven one-hundredths of a tonne of greenhouse gas during the 24-hour trip. Total cost for the team is $5373, including polar winter socks.

“Mr. Claus understands better than anyone the importance of green travel choices. At current rates of global warming, his toy factory is going to be floating on the open seas during the summer by 2030. This could seriously undermine the productivity of his elves,” Kinden says.