How much do you spend on your commute? 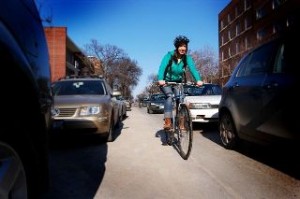 Over the past 10 years, the amount Canadians have spent on transportation has increased at a rate faster than the rate of inflation. Today, we spend 50 per cent more on transportation than we did a decade ago. A further discouraging trend highlighted in these statistics is the increased ownership of multiple vehicles: 38.8 per cent of households owned two or more vehicles in 2011, up from 37.5 per cent the previous year. Households with two or more cars are less likely to walk their kids to school or to bike, bus or walk to work. 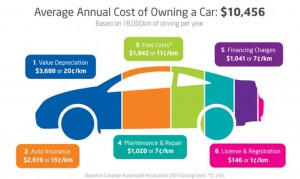 The vast majority of transportation spending is for private automobiles. It cost a typical household $10,456 to own and operate private automobiles in 2014 (based on CAA data), compared to $1,077 spent on public transportation. These figures relate to consumer spending only and do not account for the billions of dollars spent by governments on roads and infrastructure needed to operate private vehicles. Here is how the cost of driving breaks down.

All of this reliance on private vehicles not only eats up our personal budgets, it whittles away at our economic competitiveness. One survey found that traffic congestion costs over $3 billion in annual GDP across Canada, including $100 million in Winnipeg alone.

Spending more than 20 per cent of our annual household budget on transportation is not good for our financial welfare. But we have options to reduce how much we spend each year on transportation. Try taking the bus, biking or walking to work.  Get rid of your second vehicle. Consider joining a co-operative carshare. If we brought down our spending on transportation to the levels of the Swedes and Britons, we would free up billions of dollars for other things in life that are much more important to us than being stuck in traffic.