There’s something fishy in those tuna cans 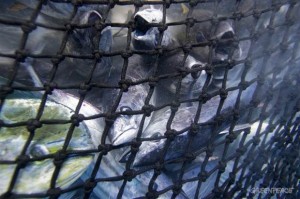 Are you trying to be conscious of your food’s impact on your health and the environment? If you consume fish, it is difficult to watch what you eat. Research of canned tuna released this week by Greenpeace showed that many retailers don’t even know what they are selling. Here in Canada, DNA samples from Clover Leaf brand tuna were found to contain multiple species both within the same can and within the same batch. Given prevalent practices within the fishing industry, there is little reason to believe other brands are any more consistent.

The inability of the fish industry to differentiate which species it is putting on store shelves poses risks to both human health and the environment. Giant purse seines can sweep up big swaths of the ocean – trapping turtles, sharks, and other threatened species. To those of us in the heart of the continent, all tuna may look alike, but some species such as big eye and southern bluefin tuna are listed as endangered or vulnerable according to the International Union for the Conservation of Nature’s Redlist.

Moreover, there are serious health concerns about mixing species in your cans. The Canada Food Guide recommends that pregnant mothers, infants and children limit their consumption of albacore tuna due to their high mercury levels, but not other species of tuna. The Guide advises that canned light tuna contains species of fish with lower mercury levels.

“Based on lower mercury levels, Health Canada does not consider it necessary to offer any consumption advice specific to canned light tuna.”

However, given the Greenpeace findings, how can Health Canada, or anyone else, be really sure which species are actually in those cans? If you want to watch what you eat, you may want to stay away from canned tuna altogether.