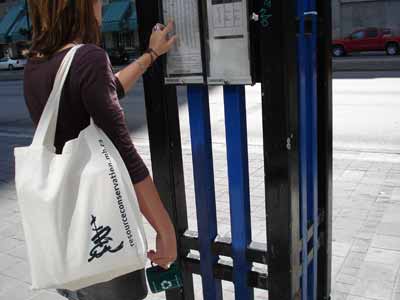 There’s no escape! Plastic grocery bags are everywhere. They proliferate in boxes, desk drawers, cars, basements, lockers, closets and utility rooms. They blow around roadways, contributing to litter. They fly off landfill sites, causing a hazard to wildlife.

Green Action Centre estimates that Manitobans carry home more than 200-million disposable plastic bags provided by grocery stores and retail shops every year. How can we make this stop? What’s a person to do? 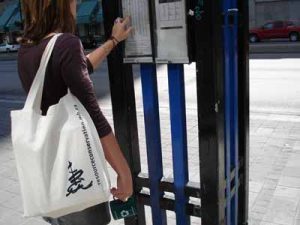 Widespread reliance on plastic grocery bags for retail customer use contributes to unnecessary resource use, waste, litter and nuisance. Given that alternatives are available and desirable, Green Action Centre supports:

Green Action Centre notes that a comprehensive approach to waste reduction and management would include plastic bags as a material designated under an Extended Producer Responsibility (EPR) program. However, while details of EPR programs are being developed in Manitoba and nationally in Canada, the above interim measures are required to raise consumer awareness and promote a shift to reusable alternatives in place of single-use disposable plastic grocery bags. 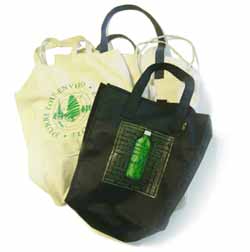 Where do I get reusable bags?
Ask for them wherever you shop, at your grocery store and other retail outlets. Environment stores have them for sale. From time to time, community non-profit groups may sell reusable bags as a fund-raiser.

What is the best material?
It’s a matter of intended use and personal taste. Reusable bags are typically made from materials such as nylon, cotton canvas, hemp, polyester, or woven polypropylene. If you are planning to fill the bags with heavy goods, you’ll want something strong and durable, but probably not too big. Since you will be using them repeatedly over a long time, check for washing instructions.

What about paper bags?
Paper shopping bags can be used for some, though not all, of the purposes for which plastic bags are normally used. However, from a life-cycle perspective, production of paper bags takes more energy and uses more water in processes that produce more waste. They are heavier, less versatile and less convenient. For example, moisture (e.g. rain) reduces bag strength, and paper does not protect contents from water.

Why not just ban plastic grocery bags altogether?
That’s certainly an option. Leaf Rapids has pioneered this approach in Manitoba, and in January 2008 the town of Huntingdon became the first municipality in Quebec to ban disposable plastic bags at the checkout. San Francisco has gone the same route, and other US jurisdictions are said to be contemplating the move. Even China has taken steps to limit plastic bag use.

Green Action Centre has not called for a complete ban at this time. There are specific uses where a plastic bag may be the container of choice. For example, if a consumer is carrying meat products from a store, a plastic bag may be more sanitary than a cloth or nylon bag.

The primary reasons to take action on plastic bags are to reduce waste, conserve resources, reduce off-site litter from landfills, and encourage individuals to take responsibility for reducing environmental harm. On a list of major environmental problems, plastic bags would rank somewhere behind climate change, energy use in homes and in transportation, waste from industry and households, agricultural and forest practices, environmental toxins, and other more urgent challenges.

Green Action Centre calculates that annual per capita plastic bag consumption by Manitobans uses petroleum roughly equal to 1.9 litres of gasoline per person. That’s about what a reasonably fuel-efficient mid-size car would burn in driving 23 km in the city or 31 km on the highway. If people were to reduce their annual driving by that amount, they would achieve approximately the same net resource conservation benefit as eliminating their use of grocery plastic bags for a year.

If we want to tackle climate change and cut fossil fuel consumption, let’s not lose sight of the critical need to drive less, heat our homes more efficiently, and buy local goods that don’t require transportation from far-away places — in addition to cutting our use of disposable plastic grocery bags.

Notes: About Those Numbers

Estimates vary widely for annual per capita plastic bag use in the absence of a reduction program — 328 in Ireland, 250 in Australia, 153 in Scotland. Green Action Centre adopts an estimate of 4 bags per capita per week, which amounts to 208 bags per person each year. A similar figure has been advanced for Ontario residents. Manitoba’s population as of October 1, 2007 is 1,190,400 (Statistics Canada). So the total number of plastic grocery bags distributed in Manitoba annually would be around 247,603,200.

US sources indicate that producing the 100-billion plastic bags used annually in that country takes 12-million barrels of oil, an amount which would otherwise produce 240-million gallons of gasoline (see for example reusablebags.com). These seem like fairly ‘ballpark’ figures, but they provide a helpful indication. If Manitoba’s consumption of plastic bags is about 208 per year by each person, then the equivalent amount of gasoline that could have been produced by the petroleum that was used to make those bags would be 1.9 litres per person.

On that amount of gas, a reasonably fuel-efficient mid-size car would travel 22.6 kilometres in the city or 31.1 kilometres on the highway. (The vehicle arbitrarily selected is the 10th most fuel efficient vehicle on a list of 115 prepared by the Office of Energy Efficiency of Natural Resources Canada. Consumption for this vehicle is 8.4 l/100 km city, 6.1 l/100 km highway. See federal Fuel Consumption Ratings.) http://oee.nrcan-rncan.gc.ca/transportation/tools/fuelratings/ratings-results.cfm

Based on the above assumptions, retail plastic bag use in Manitoba consumes petroleum resources approximately equal to 2-million (2,261,760) litres of gas every year – enough for 27-million (26,903,040) kilometres of city driving or 37-million (37,021,440) kilometres on the highway. So choosing reusable shopping bags can definitely make a difference!