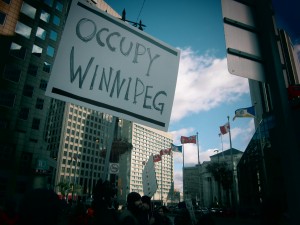 Occupy Wall Street, a social movement originating in the United States in response to the growing inequalities and inequities under the current profit-driven global economic system has spread across the world, and, on October 15th, reached as far as right here in Winnipeg.

Many have accused the Occupy Wall Street movement for not having a single, unified message that can fit squarely in a newspaper headline, or be easily understood by decision-makers and the public alike, though “we are the 99%” makes sense to most.

Being a part of the 99% means that we don’t have just one simple issue to address: poverty, racial and gender discrimination, legacies of colonization, the growing divide between rich and poor both in terms of income inequality in North America and the divide between the Global North and South, the (un)ethical practices of multinational corporations and financial institutions, and the continued unsustainable resource extraction and degradation of the environment; it means that we have a multitude of issues that are being ignored by our governments, and that it is time our collective voices are taken seriously. 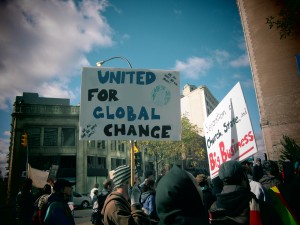 From an environmental lens, the Occupy Wall Street movement is calling for corporations and governments to take responsibility for the damage they have collectively caused to the environment, and to immediately take action by ceasing continued unsustainable practices. Here in Canada, the exploitation of the Alberta and Saskatchewan tar sands come to mind immediately, as well does the effects of global warming on flora, fauna and communities in the North – but there are countless others, from lack of garbage, recycling and active transportation plans in our cities, to the desecration of our watersheds by unsustainable agricultural practices.

If you missed the opportunity to attend the Occupy Winnipeg event, there are still many ways that you can make a major impact.

The Occupy Wall Street movement relies on both collective and individual action, globally and locally:

The Occupy Wall Street movement will not end when the protesters go home: it will be the beginning.