Human Rights and the Environment 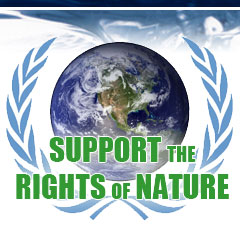 “Whereas recognition of the inherent dignity and of the equal and inalienable rights of all members of the human family is the foundation of freedom, justice and peace in the world”

So begins the Universal Declaration of Human Rights, signed on this day, Dec 10th, sixty-two years ago. The world was still reeling from the devastation of two global wars that had left dead countless millions and had nearly interred technological civilization with the nightmares of modern genocide, total war, and nuclear apocalypse. With the recognition of Universal Human Rights the General Assembly of the United Nations took an historic step, necessary for the survival of our species.

In 1948, the signatories to the Declaration did not foresee that new ecological threats to the foundations of freedom, justice and peace would soon emerge to rival the perils so recently vanquished. Global warming, pollution of the biosphere, mass extinction of species, loss of cropland and deforestation could undermine all the achievements of the past six decades in advancing the causes of rights and peace. They require an extension of rights beyond the individual, or our collectivities, encompassing the environment, without the security of which, no other rights can be realized.

Environmental changes threaten to shred the fabric of social life in the coming decades. In 2007, a group of US generals released a report titled National Security and the threat of Climate Change. The report warned that global warming could cause political upheaval and failed states. “The chaos that results can be an incubator of civil strife, genocide, and the growth of terrorism.” A 2004 Pentagon report delivered an even more stark assessment: “Disruption and conflict will be endemic features of life, … once again, warfare would define human life.”

At a local level, impaired ecosystems can deny populations the rights to to life, liberty and security of person. In Canada, aboriginal communities and low income populations have been the first to have their rights abrogated by environmental decay. The First Nations and Métis communities in Northern Alberta have suffered elevated rates of rare cancer that have been linked to tar sands development.  In Southern Ontario’s chemical valley, the Aamjiwnaang First Nation has recorded “the lowest rate of live male births in the world (two girls born for every boy) and high rates of death, miscarriage and disease” . Here in Manitoba, thousands of people on First Nations communities live without running water and are at greater risk of deadly health problems as a result.

Across the world, the recognition that human rights are founded on environmental rights is gaining ground. In 2008, the people of Ecuador approved an amendment to their constitution granting to nature the rights “to exist, persist, maintain and regenerate its vital cycles, structure, functions and its processes in evolution.”  In September, 2010, the United Nations General Assembly resolved to affirm the rights to water and sanitation. These advances in environmental rights are a necessary corollary to Universal Human Rights which were recognized years ago. As we remember the importance of the Declaration’s 30 articles, let us take a moment also to recognize the distance will still have to travel to ensure that rights are preserved for the generations who will come after us.