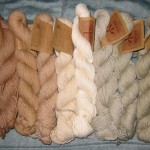 Fashion can be fun, but it also produces huge volumes of waste. When last year’s big look becomes this year’s big yawn, we have to start asking questions about the life cycle of the clothing industry. What are the real costs of stores and closets filled with clothing that is cheap and destined for the landfill? According to the US Environmental Protection Agency, Americans each discard about 30 kg of ‘waste’ clothing and textiles each year, amounting to 4 per cent of municipal solid waste. It’s a fair guess that the numbers for Canada are comparable.

Apart from waste, there are concerns about how fabrics used in clothing and textiles are produced and what chemicals are used to dye and treat them. For example, Health Canada has acknowledged concerns about polybrominated diphenyl ether, a flame retardant used in plastics and upholstered furniture (but not clothing). The production of “cheap” clothing and footwear has environmental, economic and labour implications for workers and consumers around the world. But there is good news, too. Sale of used clothing through thrift and consignment stores has increased substantially in recent years. And some recovered fabrics can be recycled into insulation, paper products and industrial rags.