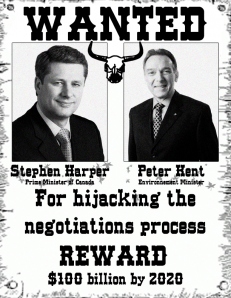 As the United Nations Climate Change Negotiations are entering their second week in Durban, South Africa – Canada keeps delivering fresh new COP gossip. While Canada’s Environment Minister, Peter Kent claims he will be defending tar sands industry at these negotiations, the South African High Commissioner is making allegations of Canada ‘arm-twisting’ vulnerable nations to leave the Kyoto Protocol. Many climate-vulnerable countries have complained that Canada has been using foreign aid packages as bartering chips for countries to back out of the 1997 international climate agreement.

In our daily morning briefings with the Canadian Delegation I needed to call them out on this and asked the lead negotiator Guy Saint Jacques, “Why Peter Kent won’t admit that Canada is going to leave the Kyoto Protocol, but they are secretly asking other countries to do so?”

Guy St. Jacques responded, “I am not aware of anyone at Foreign Affairs or Environment Canada having any discussion along those lines. From my perspective [these allegations are] a total lie and I find this very perplexing and counterproductive.” – My brain was spinning while I am typing down his answer and then stopped – did he just called the High Commissioner of South Africa to Canada a liar? Whose behavior is more counterproductive here?

The Government of Canada has long held the stance that it would not make further Kyoto commitments until all major emitters, particularly China, did the same. Recently, China has agreed to join a global legally-binding agreement, with the cooperation of other major emitters. Despite this movement, it is likely that Canada will pull out of the Kyoto Protocol in entirety by the end of December.

At 5pm South African time Peter Kent will hold a press conference to polish up his cracking image by promising money for fast-start finance for climate adaptation. One thing he won’t mention – 50% of the money will be given out as loans by the Canadian government to developing countries.  Money has little meaning if we don’t address the mitigation dimensions, we can’t buy off our inaction.

The failure to cooperate with the international community on achieving fair emission reductions targets and recognizing common but differentiated responsibilities clearly show where Canada’s intention lay.

Fossil of the day: Saudi Arabia for its statement during the plenary session for long-term cooperative action: “maybe we don’t need mitigation”

*picture above was distributed by the Quebec Youth Delegation this morning.