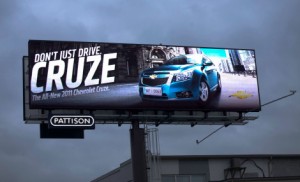 Last week, Winnipeg city council’s appeal committee overturned a ruling by the planning and land use division and allowed Pattison Outdoor Signs to go ahead with a proposal to build an electronic billboard outside Gordon Bell High School at Portage and Borrowman. Despite widespread community opposition, environmental and health concerns, the company will be allowed to construct a 200 square foot flashing billboard outside the school. This proposed sign sets a precedent for increased light pollution in residential neighbourhoods in Winnipeg.

The committee that approved the project consists of:

On the strength of this success, Pattison is giving another kick at the can for a similar project a few blocks down the road at Portage and Aubrey. This second sign would consume 4600 kilowatts hours of electricity per month. This is the energy equivalent of five or more typical single family homes. At a time when most Manitobans are seeking to reduce their carbon footprint, entrepreneurs like Pattison are looking for new ways to waste electricity.

Light pollution has been linked to health effects including fatigue, stress and depression. Research published in the Journal of the National Cancer Institute has tied light pollution to breast cancer. A study presented last year by the NOAA found that light pollution can increase urban smog by delaying the breakdown of nitrate radicals. The benefits of Pattison’s signs are frivolous compared to the potentially serious effects they could have, especially as they are stationed in a residential neighbourhood where they will impact growing children.

These proposed signs will likely not be the last such applications to come before the City of Winnipeg. Whatever competitive advantage advertisers might gain from having their message blaring to passersby at the speed of light will doubtlessly attract others to replicate the project. Manitoba’s low cost of electricity, as Green Action Centre has recently argued before the Public Utility Board, encourages wasteful projects that have few positive economic benefits.

It is time for Winnipeg councillors to listen to the community and consider the health of children and other residents before short term profits and marginal tax increments.