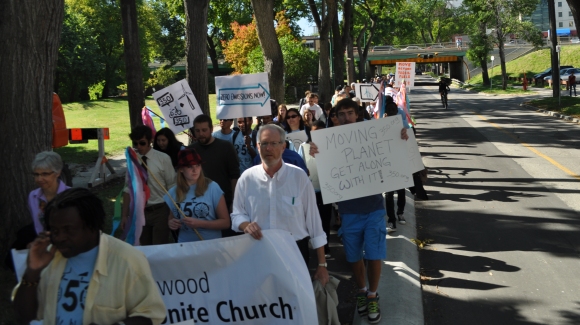 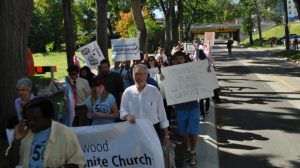 Last Saturday, Winnipeg joined cities in 150 countries around the world in a day of action on climate change.  Hundreds of Winnipeggers came out for the Moving Planet Manitoba event to raise awareness that overuse of fossil fuel is choking our planet and will lead to catastrophic climate change if not reversed. Speaking of moving, let me divert your attention first. Id you are planning to move to another place, I mean a distanced one? Let me help you. Contact MyLongDistanceMovers! Here are some of their moving quotes from best long distance movers.

The event started with a parade from the Legislature to the Forks along the Assiniboine active transportation route.  The parade was led by a group of aboriginal drummers and was followed by the Burning Trolleys Marching Band.

It was a boisterous march down to the Forks.  At the Forks, volunteers from Canada World Youth were on hand to draw people’s footprints in chalk, which people signed to mark their commitment to reducing their greenhouse gases.  Music by Feed the Birds and After Party made for a lively afternoon. 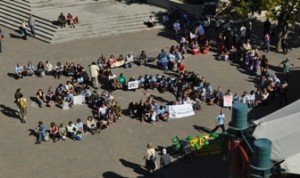 The global event was coordinated around the world by 350.org.  350 parts per million is considered by scientists as the maximum safe level of carbon dioxide in the atmosphere.  Any higher and we risk catastrophic global warming. Sea ice will melt, many agricultural regions will become arid, and the the kind of flooding we saw in Manitoba this spring will be more commonplace.  We are currently at 390, and going up.  So let’s all cut down on our use of fossil fuels and bring our greenhouse gases back down to normal.

Read the speech “Towards a fossil free future” delivered by Climate Change Connection’s Curt Hull at the event.