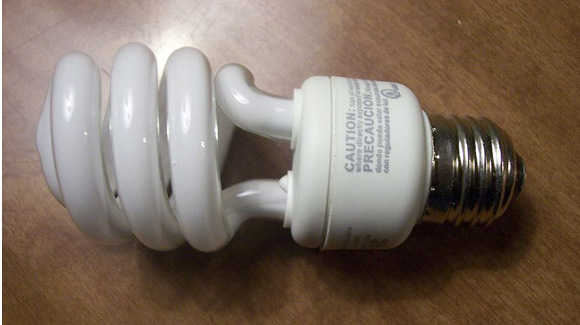 They can help the environment, but only if they are recycled 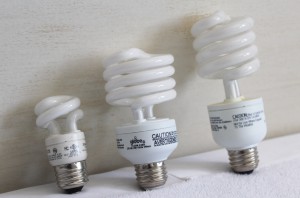 Compact Fluorescent Lamps / Lights (CFLs) are an energy saving alternative to conventional incandescent light bulbs. They use about one-quarter the amount of electricity to produce an equivalent level of lighting. Their use has increased exponentially since the mid-1990s as households look for ways to reduce their energy bills and greenhouse gas emissions. Programs from Manitoba Hydro and the provincial government have also encouraged people to switch over to this technology. According to Natural Resources Canada, if every household switched one inefficient conventional light bulb it would save Canadians 73 million dollars in energy costs and reduce greenhouse gases by almost 400 000 tonnes of carbon dioxide. That’s one easy step on the road to preventing dangerous climate change. But they only help the environment if they are properly recycled.

In 2007, Canada announced it would phase out incandescent light bulbs beginning in 2012. This planned phase-out was delayed because of concerns regarding the health effects and lack of proper recycling facilities for CFLs across Canada. In 2012, Manitoba took a step towards making recycling easier by developing an industry stewardship group called the Product Care Association which handles recycling of CFLs and other fluorescent lights. Product Care has around 75 locations throughout Manitoba where the public can drop off residential fluorescent tubes and CFLs.

[Update: The ban on incandescent light bulbs came into effect January 1, 2014. However, regulations on the amount of mercury contained in CFLs has not yet been enacted.]

Each CFL light bulb contains an average of 5 milligrams. Under new regulations, that amount will be reduced to 3.5 mg. Mercury is a dangerous neurotoxin. Neurological symptoms of mercury poisoning have been observed at doses as low as 0.25 mg per day. Health Canada drinking water guidelines recommend maximum acceptable concentration of 0.001 mg/L. Each bulb has the capacity to render 5000 litres of water undrinkable. Mercury also bio-accumulates in fish and some predatory species such as tuna have been frequently found with elevated levels.

Mercury in CFLs poses risks both for the consumer and the environment unless the lights are used and disposed of safely. Unfortunately, very few CFLs in Canada are properly recycled. In the United States, it was estimated that only 24 percent were recycled in 2004. Some estimates in Canada have been as low as 5 percent. The Manitoba government does not provide records of the level of recycling here. CFLs that are not recycled generally make their way to landfills. We like to think of landfills as a permanent solution to our waste problems. But anything we put in a landfill eventually makes its way into the environment. Landfills break down, and when they do, they act as a source of pollution for soil and ground water for generations, slowly leaching into the environment.

It should be remembered that although CFLs contain mercury, they can also help limit the net amount of mercury in the environment by reducing the amount of electricity we use. Flooding from hydro-electric production and coal generated electricity are even bigger sources of mercury in the environment. Although CFLs are not perfect, they are part of the solution for reducing emissions until better technologies are developed.

In homes, mercury from CFLs does not pose a hazard during their normal use. However, if a CFL breaks, it is important to treat the debris as hazardous waste and follow special precautions for clean up including:

Health Canada’s recommendations for clean up can be found here.

The EPA in the United States also has clean-up instructions.

Though the federal government’s ban on incandescent light bulbs came into effect January 1, 2014, as yet there is no clear plan to recycle more than a small percentage of CFLs. Canada needs a complete system of recycling facilities, extended producer responsibility and broad public education programs to increase the rate of recycling.

To ensure that your CFL is safely disposed of you can: