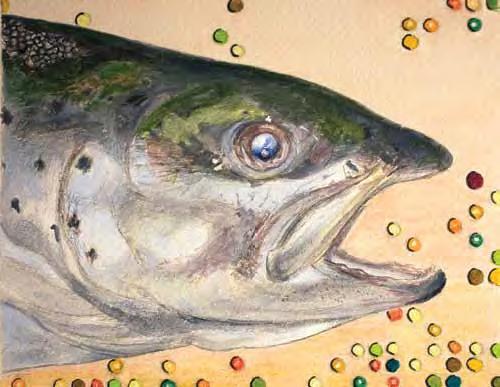 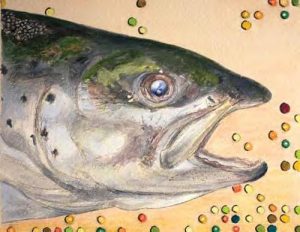 Canada is set to become the launching pad for a new wave of radical biotechnology. The first genetically engineered (GE) animals for human consumption are on the menu for regulatory approval in the United States and GE salmon is the entrée. AquaBounty, the company behind the GE fish, proposes to produce the eggs in Prince Edward Island. The fish’s growth hormone genes were developed using Canadian publicly-funded research. However, the Canadian government’s inadequate framework for assessing GE animals could result in the product being approved for export without an analysis of the environmental, social, or human health consequences of GE fish.

For 15 years, U.S.-based AquaBounty has been seeking approval from the U.S. Food and Drug Administration (FDA) for their genetically engineered salmon. They call their product AquAdvantage and claim that the fish will grow to market size twice as fast as conventional farmed salmon. It takes genetic material from growth genes of the Pacific Chinook salmon and an antifreeze producing gene from an ocean pout (an eel-like species), and transplants them into Atlantic salmon. The resulting GE fish would grow all year round instead of just part of the year, and could be produced in inland freshwater pens.

In September 2010, the FDA held public hearings on AquAdvantage. Their initial assessment found the fish safe for human health and the environment. At the hearings critics pointed to the FDA’s “sloppy science.” The Center for Food Safety disclosed that the FDA had knowingly withheld evidence from two other U.S. governmental organizations that oppose the plan, the Fish and Wildlife Service and the National Oceanic and Atmospheric Administration. Hearings and deliberations on the product continue.

AquaBounty promotes its product as a solution to dwindling food supplies, overfishing and rising food costs. However, their GE fish presents risks to the environment that could wipe out biodiversity, destroy local industry and produce an unsafe product no one wants. Once GE fish are produced on a commercial scale, contamination both of the environment and of the food supply is a virtual certainty. Environmental contamination could end up extirpating wild fish populations, as the aggressive GE stock competes for food and habitat with native populations. New diseases could spread from enclosures and harm natural populations, even if the fish manage to be contained. Aboriginal groups, commercial fisheries and salmon-dependent communities are all at risk.

Holes in the regulations

AquaBounty proposes growing eggs in Canada and then flying the fry to Panama. There, in the Panama highlands, the fish would be grown to market-size then shipped to the U.S. for consumption. This globe-trotting plan would allow the fish to skirt environmental regulations of all the countries involved, since no government would oversee the product through its whole lifecycle from egg to plate.

The company has made its application to the FDA contingent on egg production and rearing occurring elsewhere to avoid domestic opposition. Meanwhile, the production of genetically engineered animals in Canada falls through regulatory processes of Health Canada, the Canadian

Food Inspection Agency and the Department of Fisheries and Oceans. As early as 2001, the Royal Society of Canada’s Expert Panel on Biotechnology raised concerns about the inadequacy of regulations dealing with GE salmon. The panel found that unpredictable and unintended reactions to the introduction of novel genes are “the rule rather than the exception in fish.” For this reason, it recommended against approving GE fish.

The Canadian government has done little to improve GE regulations since. The sole avenue for assessing GE fish comes from a little used section of the Canadian Environmental Protection Act. The “Products of Biotechnology” regulations provide only a 120-day comment period, with no guarantee that even a “toxic” biotechnology product would not be produced and exported for commercial sale.

In 2007, Health Canada, which is responsible for assessing the safety of food in Canada, responded to the FDA on a draft risk assessment on animal cloning. It noted that Canada was asking biotechnology companies to hold off on requests for assessing cloned animal products in Canada, because “there is currently insufficient data to guide the pre-market safety assessment of these products.” The same should be said, a fortiori, about GE animals. The data on GE animal products is scant. For Health Canada to conduct a thorough and proper safety assessment of GE salmon, it would have to divert resources from other more pressing food safety concerns. In the absence of demonstrated consumer demand for genetically engineered salmon, Health Canada’s holding stance should be maintained. Health Canada’s position must be supported by other departments of government, including Environment Canada, which should not allow the production of GE animals in the first place.

What does this mean for Manitoba?

1. Manitobans will be eating GE salmon soon enough if it is approved.

If Canada does not approve the fish for sale here, GE fish would soon contaminate our food supplies nevertheless. Canadian and US food chains are so interlinked that it would be difficult to keep the GE fish out. Several other GE contamination incidents, including GE rice and corn have demonstrated that what gets into the U.S. food chain ultimately ends up on store shelves in this country. Canada is in a position to stop the production of GE fish by not allowing AquaBounty to produce its GE eggs here. If we wait for GE fish to appear in our rivers and oceans, or grocery shelves, it will be too late.

2. GE fish could flood the market

GE fish will have negative impacts on Manitoba fisheries. Genetically engineered salmon could flood the market with cheap fish alternatives. It is unlikely that GE fish would be labelled so consumers may turn off eating fish, wary of consuming an untested product. Commercial fishers in Manitoba and the Manitoba Aquaculture Producers Association have opposed GE fish. Both are growing industries. GE salmon will displace markets for sustainably produced fisheries here in our own province.

3. Approval of GE salmon will pave the way for other GE animals

Biotechnology companies have many other genetically engineered animals under development. A GE trout is already under development. Perhaps most significant for Manitoba is the GE EnviroPig. This is a pig that is purported to produce less phosphorus than conventional pigs. With over 7 million pigs in this province, Manitobans should be carefully watching the development of how GE animals are regulated.

The genetic engineering of animals will take food off the farm and into the laboratory. The effects would be even more far reaching than the first wave of genetically engineered crops, such as corn, canola and soy that began 15 years ago. Those crops were largely confined to animal feeds and processed ingredients.

In the 1990s, biotechnology companies hoped to gain rapid control over wide swaths of our global food system. Public backlash and organized resistance from environmentalists, consumers, and farmers on all continents prevented agribusiness corporations from genetically engineering the most important cereal crops like wheat and rice and also kept GE out most fruit and vegetable produce for direct human consumption. If GE meat is approved, it would leave consumers staring this technology in the face for the first time on a widespread scale. It would be the biggest transformation of our relationship to food since the industrialization of agriculture in the twentieth century. Well, civil engineers can design something that will be productive in terms of agriculture. For all licensed civil engineers out there, we are hiring. Just visit https://www.navartis.co.uk/construction-civils.

The public deserves to have their concerns heard over such a dramatic change in the food system. In Canada, the Canadian Biotechnology Action Network is coordinating action against GE animals. Get involved, sign their petition, access their letter templates, or find out more information at Cban.ca.