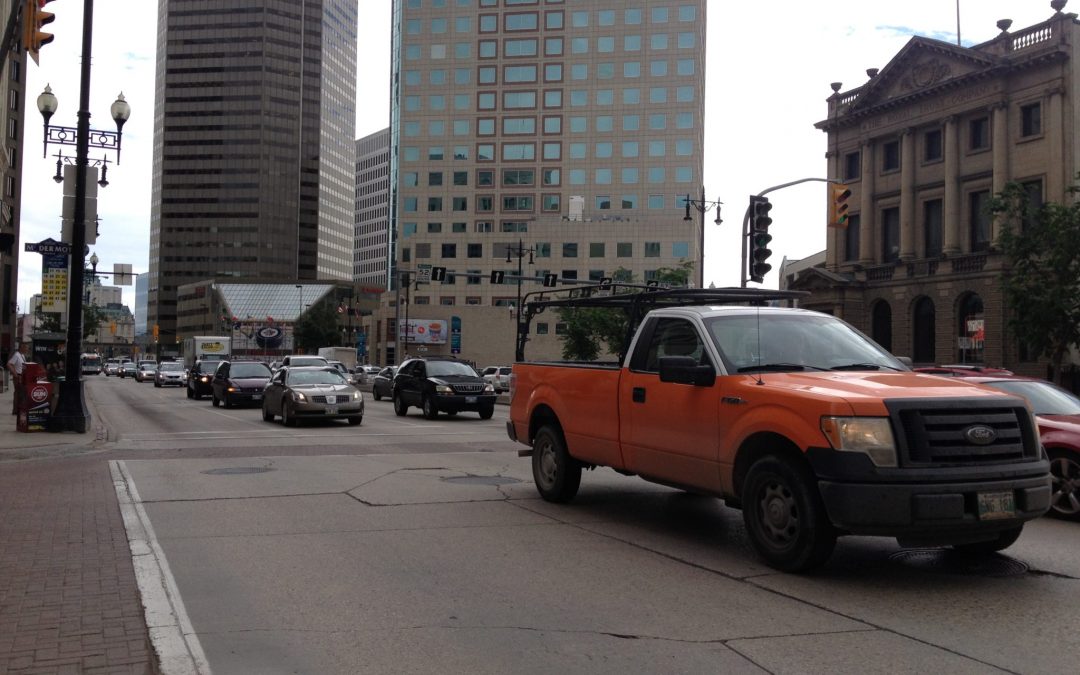 A recent report by the International Energy Agency (IEA) found that Canadians purchase and drive the world’s largest and most polluting vehicles. Canadians’ vehicles emit an average of 206 grams of CO2 every kilometre, which is equivalent to tossing 400 plastic straws out of the window each and every kilometre.

The increased demand for larger vehicles, particularly Sport Utility Vehicles (SUVs) and Trucks, are linked to perceptions of heightened safety, increased social status, and also vehicle manufacturers’ changing offerings. Despite the perceived benefits associated with large vehicles, they are wreaking havoc on our environment, public safety, and our cities.

Read on to discover why size really does matter, especially when it comes to vehicles.

The average Canadian’s vehicle burns approximately 21 tonnes of gasoline over its lifetime, which is equivalent to 130 full barrels. Burning this amount of gasoline results in the release of 66 tonnes of carbon pollution into our atmosphere, which means, each new purchase of a gasoline-burning vehicle guarantees significant future pollution.

As we look ahead to our climate targets in accordance with the Paris Climate Agreement and the recommendations of the IPCC Report, it is concerning that many of today’s high-emitting vehicles will still be on the road by 2030 and into 2040. As new gasoline-burning vehicles are purchased and cities continue investing in fossil-fuel burning infrastructure, this commits to far too much future pollution than what allows us to maintain livable temperatures.

Furthermore, emissions have continued to rise at an alarming rate, specifically between 2010 and 2018. During this period, the largest cause for the increase was power generation, followed by SUVs. The change of global emissions, per sector, demonstrated SUVs to have an increase of 544 megatonnes of CO2, compared to SUV emissions previous to 2010.

“If SUV drivers were a nation, they would rank seventh in the world for carbon emissions”

In this period, SUVs doubled their global market share, from 17% to 39%, with their annual emissions rising to more than 700 megatonnes of CO2 (more than the yearly total emissions of the UK and the Netherlands combined). This significant shift towards larger and heavier SUVs has entirely offset the efficiency improvements in small cars and the carbon reduction of electric vehicles.

Innovations in vehicle technology have continued to develop in order to make those inside vehicles safer while making those outside vehicles less safe. A recent study by the National Highway Traffic Safety Administration found that 6,283 pedestrians were killed by people who drive, which is the highest number on record since 1990 in the United States. The study also shows a 6.3% increase in cyclist deaths compared to the year before, with the number of women cyclist deaths shooting up by a shocking 29.9%.

These statistics are not unique to the United States, as we have seen similar trends in Manitoba.

Based on MPI data released in mid-September, we have had as many pedestrian fatalities (12) as in the previous five-year annual average (12). This nine-month count represents the highest pedestrian fatality count in the last 20 years (the most pedestrian deaths in a single year on record is in 2007 with 16). Nearly half of all pedestrian deaths occur at an intersection or cross-walk. If you watch a few video clips from this CBC experiment that surveils a cross-walk in Winnipeg’s South-Osborne, there is no surprise that the rates of injuries and deaths are so high.

While the increase in large vehicles on our roads is not the sole cause of increased dangers for pedestrians and cyclists, it does exacerbate certain factors, such as; speed, height, and weight. Large vehicles have a striking zone which hits a pedestrian where their vital organs are and there is an increased risk of pedestrians being pulled under the vehicle. In some devastating cases, pedestrians have been pulled under vehicles and dragged, such as the recent occurrence in British Columbia.

“Larger bodies and higher carriages mean pedestrians are more likely to suffer deadly blows to the head and torso. Higher clearances mean victims are more likely to get trapped underneath a speeding SUV instead of pushed onto the hood or off to the side.”

The higher front profile (made even more dangerous by features like grills and bush bars), makes these vehicles at least twice as likely as cars to kill the walkers, joggers, children, and cyclists that they hit. The problem lies in design, of our roads and our vehicles, which continue to get larger, faster, and deadlier.

It is also worth noting that many North Americans have purchased SUVs with the perception of enhanced safety for themselves and their families, but many have failed to look at the safety data that has been available for decades. SUVs have been marketed as a safer vehicle than the smaller ones on the market, but studies have shown that those driving them are 11% more likely to die in a crash (compared to people driving regular-sized cars).

It is well documented that urban vitality and livability of a city is increased when pedestrians, cyclists, and transit users are prioritized over vehicles. The presence of vehicles contributes to noise pollution and excessive dead space (known as parking and non-complete streets). These negative impacts are multiplied when the vehicles get larger, more powerful, and louder.

The level of noise pollution is a factor of the shape of the vehicle, the size of the tyres, and the size of the engines. Consistent exposure to noise, specifically, traffic noises in an urban setting is considered to be a significant environmental stressor. High noise levels can cause annoyance and severe stress on both auditory and nervous systems of pedestrians, with vehicular noise pollution being a major factor in mode choice. A study found that persons react to this stressor with an increased pace of life, which translates directly to faster walking speeds. When vehicular noise pollution is reduced and/or eliminated, it helps to ensure safe travel options, improved walking mode-share, and increased usage of pedestrian facilities.

In regard to space, large vehicles simply take up more of it than smaller vehicles. For decades, planning and parking policies have sought to accommodate these vehicles through parking minimum requirements and wider roads. It has been well documented that creating more parking and wider roads actually lead to more vehicles and more traffic. This is recognized as ‘induced demand‘, which means that increasing the supply of something (such as parking spaces and roads), makes people want that thing even more. These trends continue to push urban sprawl and make destinations increasingly difficult to reach by walking, wheeling, cycling, and/or taking transit.

At a time when our cities should be giving less space to vehicles, vehicles are getting larger and demanding even more precious space.

In terms of solutions, there are numerous advocacy groups calling for a full out ban of these personal-use SUVs and Trucks in cities. Berlin, Germany, recently held a protest to demand a ban on these vehicles after a driver hit and killed 4 pedestrians. Furthermore, activists in Frankfurt, Germany attended a motor show to protest the vehicles’ significant impact on the environment.

Nonetheless, it is imperative that the transportation sector sees a dramatic reduction in the number of passenger vehicles on the road (big and small) to ensure net-zero carbon emissions and zero pedestrian/cyclist deaths.

It’s more than time to acknowledge the externalized harm associated with these large vehicles. It is our responsibility to take action to reduce this unnecessary harm to our environment, vulnerable road users, and our surroundings.