Seven things I learned in 5 years 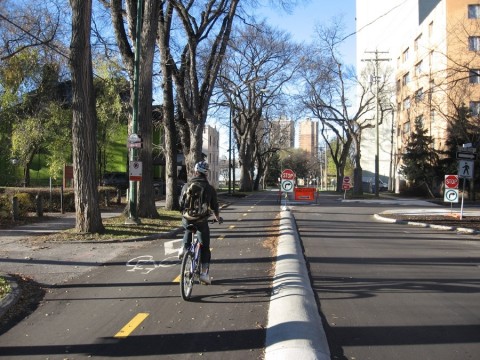 Five years ago circumstances in my life plunged me in to a situation where I went from a part time cyclist to a full time bicycle commuter and an advocate for active transportation.

Cycling year-round combined with a bit of internet time and a few cold ones with other active transportation ‘sympathizers’ has left me with a few things I think I know a bit about.

I could wear my wife’s underwear but it wouldn’t fit very well and after a short time most might stop. I think that is what cycling on busy roads is like; you can do it, but it might not be a good fit. Cycling on a dedicated bike path fits like your own underwear; you can do it every day feeling comfortable and looking your friends straight in the eye. 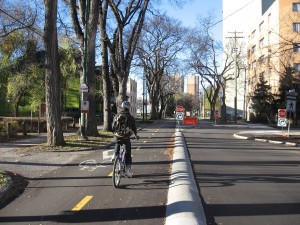 I do ride on the road most of the time because in Thompson, we are just getting started with an Active Transportation Network, but that doesn’t mean I love it. Over time I have gone from telling myself things like, “be a confident rider”, “ride a meter from the curb”, “same road, same rules” on some of our busiest streets – to using our multi-use paths and finding routes on calmer streets. It turns out less stress is better for everyone, who knew?

Everyone’s go-to line seems to be, “I’d like to cycle to work, but I can’t because my hair will be a mess.” I think what they are really saying is, “I’m not sure what my friends would think” (social norms are powerful no matter how old we are) or, “I use a car, that’s what everyone does” (I’m not a conspiracy theory guy, but many of us have drank the Kool-Aid on car culture).

Hair is easy to pick on because it can’t talk back. If it’s really the hair, then don’t wear a helmet (I’m fine with it if you are using calm routes and aren’t under 18), go at an unhurried pace so you don’t sweat as much, fix it when you get there (here’s a few tips!) or cut it all off because it was thinning and it had to go anyways (oh wait, that last one is just for me).

If you are respectful of others on the road and you commit to being out there in less than perfect weather, people seem to respect it. The number of friendly horn honks or full hand waves versus middle finger waves is about 100 to 1 for me. Maybe that’s an anomaly but it’s the truth.

I believe most people like to see cycling and walking and want to live in a community that’s active and engaged, even if they don’t bike themselves.

Yes you can commute on that bike. Start with the bike that’s hiding in the shed; splash some oil on the chain, and pump up the tires. Try it for a while and likely it will be more than adequate and if it isn’t, you will have had some time to explore other styles you might prefer. Remember, it isn’t about the bike, it’s about the riding.

You live in Canada so you already go outside in all sorts of weather. Don’t give all the money you made at your garage sale to MEC – try what you already have first. Maybe over time you will find there is a coat or rain pants or underwear that would be useful – that’s when to go shopping, but start with the clothes you wear every day.

In the beginning, if you give yourself a way out of cycling to work or in a commitment to ride a bike to complete your errands, you are setting yourself up for an easy way out. Don’t test these waters with just your big toe! Bend your knees and launch yourself in with both feet. I think you will find that it doesn’t rain as often as the weatherman predicts, it isn’t really that cold once you get going and that crazy wind is a bit annoying on the way to work, but man do you sail on the way home! Make it a habit, not an option. 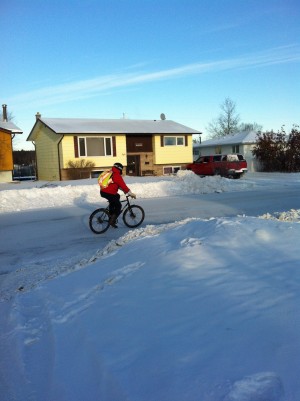 In my town and in most of Manitoba, it gets cold and stays cold but surprisingly, with biking that’s a good thing! The slipperiest time in your car, on your feet and on two wheels is right around zero degrees Celsius. Once it gets colder, hard pack snow is like riding on the road. We have many months that get cold and stay cold (Toronto eat your heart out!). Before you revert to reason number two and hop in a vehicle, please refer to number 5 –you will find that because you are active, you need less than you think.

I challenge you to get out and ride! Use your bike to get to work, to visit friends or when you are going out to do your thing. Ride whatever bike you have, in your normal clothes, on bike paths or calm streets. Jump in with both feet and do it for a couple months; you won’t regret it, you might not get the finger, and you may even keep riding when ‘it’s not as slippery as you think’.

Bruce Krentz and his family live in Thompson where he leads the Thompson Active Transportation Committee. He has a background in Recreation, Community Development and Health Promotion and is a father, musician, athlete, and woodsman; all things he says he practices with varying degrees of success.