Compost Winnipeg: we know you want it! 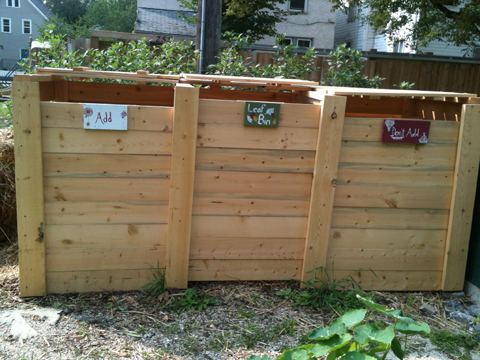 It’s a bit embarrassing to live in a major Canadian city that doesn’t have a municipal residential or commercial composting program. Yes, we’re talking about Winnipeg. And we’re talking to you. Because at the end of the day, your mayor and your city councillors do what you demand of them. In order to get Winnipeg organics out of the trash, you need do something about it.

There are many people in this city who have decided that they’re tired of tossing perfectly compostable food into the trash can – thanks to the more than 20% of Winnipeggers who use a backyard compost bin. We also acknowledge inner-city neighbourhoods like West Broadway, Spence, Daniel McIntyre, and St. Matthews, which have compost bins in their community gardens, set up for anyone to access, and maintained primarily by volunteers.

Small-scale composting can have a notable impact on reducing urban waste. But backyard composting is not the norm for Winnipeg, and there are limited options available beyond the backyard. We felt it was time to change this, so after 30 years of operating a successful non-profit, we’ve taken the next step and started a social enterprise called Compost Winnipeg, which focuses on reducing organic waste in the workplace.

Social enterprises are the businesses of the future. Run by non-profit organizations, they aim to strike a balance between social, economic, and environmental benefit. If you’ve heard someone mention the phrase triple bottom line, this is what they’re talking about. And a triple bottom line is what we’re in this for.

We’re employing people who love to compost. Seriously, they LOVE it; they eat, sleep, and dream compost. We’re also trying to make a small profit so that we can weather the stormy reality of come-and-go funding for environmental non-government organizations. And we’re diverting a huge amount of waste from the landfill: roughly one tonne per month! And that’s with only a handful of customers – but we’re just getting started.

We’re gearing up for an official launch that will coincide with International Compost Awareness Week, which runs from May 1-7, 2016. We collect organic waste from small restaurants and cafés, offices, apartments, and condos located in the downtown area, and this spring we’ll start picking up waste from our most central customers by bicycle.

If you don’t believe there are people eagerly waiting to collect your food scraps, then you’ll have to sign up with Compost Winnipeg so you can see it for yourself. Seven trendsetters have seen the proof in person, and we’re happy to name them so you can support their business or step up your own game: HTFC Planning & Design, iQmetrix, Little Sister Coffee Maker, Health Sciences Centre, Keystone Agricultural Producers, Royal Manitoba Theatre Centre, and 860 Westminster Housing Cooperative.

We’d also like to thank Amber van den Broek who coordinated the 4th Annual Snowball fundraiser that raised over $10,000 for Compost Winnipeg. Thanks to everyone who came out and supported this event, we will be able to purchase a cargo trailer for our electric bike pick-ups. We’re not content to stop at reducing the methane gas produced when your waste breaks down in a landfill; we’re going a step further and reducing emissions that would be caused by using a motor vehicle to transport the organics.

Don’t let your organic waste rot in the dump. If you work outside our service area, consider making a donation to our start-up so we can grow and expand to your neighbourhood as soon as possible. Let’s not incur more environmental debts for future generations to pay back.

Compost Winnipeg. It’s a new business doing something so old it’s become new all over again. And it’s here to help you green your garbage. Compost, Winnipeg! We know you want to.