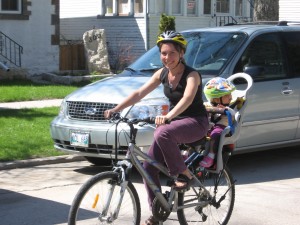 Women are often considered the “canary” that reflects the status of cycling in a given city. A higher proportion of women getting around by bike typically results when a community gets it right with the way and type of cycling infrastructure that is built. (Photo: Karen Loeb and daughter Alice)

For example, The Netherlands boasts an amazing 55% of commuting cyclists as women (Scientific American), with Germany not far behind at 49%. Minneapolis shines above the rest in the U.S., with women representing upwards of 37% of cyclists. While overall data is not available in Winnipeg, we know that women represent 28% of those 15 years and older who commute to work by bike.

But is it all about infrastructure and women’s higher aversion to risk?

Making it easier to get your kids to school on bike, cycle to the grocery store, take the whole family biking, or learn about basic bike maintenance and skills for riding in traffic are also important. A bit of fashionable gear doesn’t hurt either! 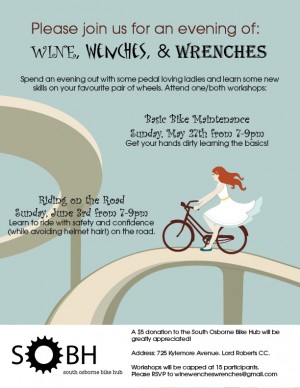 But one could argue this is equally true for men as for women. So maybe it’s more about comfort zone and learning styles.

This has led to a growing number of bike maintenance and repair offerings taught by and for women in Winnipeg. The Bike Dump’s “Moon Cycle” courses and South Osborne Bicycle Hub’s popular “Wine, Wenches and Wrenches” events (see poster) are two recent examples.

If there are no courses for women in your neighbourhood or community, consider setting up your own! Gather a few friends for a weekly bike ride to provide a comfy introductory environment for women who are new to riding.

For true inspiration on the value of women-focused bike rides and courses, give a listen to the March 2012 webinar recording from the Women Cycling Project (U.S.) on “Empowering Women to Bicycle for Transportation“.