Anders Swanson, who also works with the Active and Safe Routes School Program at Green Action Centre, will be attending the first ever international Winter Cycling Congress in Oulu, Finland, on Feb 13-14, 2013. Support is being provided by Rivers West, The Forks, Destination Winnipeg, Travel Manitoba, Bike to the Future, Manitoba Cycling Association, Natural Cycle, Winnipeg Trails Association, and Green Action Centre. Below, Anders shares his thoughts on what he hopes to get out of the conference and bring back to Winnipeg to share with the rest of us.

The general theme for me is that winter cycling is/can be “for everyone”. So the plan is to come back from the conference with empirical, anecdotal and visual proof for each of the following hypotheses:

Surface quality plays a more important role in the decision to cycle than the temperature, and good infrastructure guarantees ridership.

Infrastructure needs to be consistently maintained, reliable, easy to find, and available year-round.

3. Getting outdoors, and out of the car, in winter, is proven to be important.

Winter cycling plays an important role in health, tourism, environment, and it shows.

4. Improvements for winter cycling improve outdoor access for pedestrians, wheelchairs, skiers and skaters and everybody!

It’s not just about cycling or getting to work. It’s about school travel, it’s about sport, it’s about recreation, it’s about maximizing access to all of the opportunities that winter and Winnipeg has to offer.

I will look for striking, direct parallels between the basic characteristics of other cities and Winnipeg. 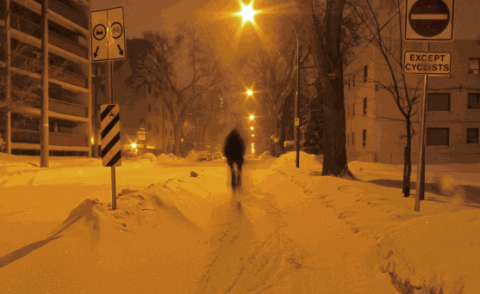 (In addition to gleaning ideas and evidence-based approaches from other winter cities, Anders will be presenting on cycling in Winnipeg. Here is a snapshot of that presentation.)

Winnipeg is rapidly emerging as a hotbed of utilitarian cycling in Canada.

A capital city in the longitudinal center of North America, far from any nearby population centers, and a century removed from its heyday as the “Chicago of the north,” Winnipeg has learned to stand on its own, unafraid to be unique, unafraid to quietly, but surely, demonstrate leadership and an ability to change its direction.

While other cities were sinking money into freeways, Winnipeg was content. When it became clear that we would soon outgrow our unsustainable infrastructure, Winnipeg began investing in rapid transit and bike paths. Even if other similarly progressive cities in bigger markets were getting all the attention, Winnipeg simply flew under the radar, content to slowly emerge as a leader in policy development, infrastructure innovation and community engagement.

But what about winter?

Winnipeg’s self-imposed nickname is, after all, “Winterpeg”. Being in the middle of a continent may mean blue skies and long summers, but it also means that when winter arrives, it packs a punch. Prevailing winds pick up speed across the prairies and leave knee-deep snow in the streets before giving in to the pines and lakes of the Great Boreal Forest.

Building roads and bike paths here, lain as they are in a flood plain on top of an ever-shifting, ever-freezing bed of pure clay, has never been easy. Keeping asphalt smooth is a problem no matter what the mode of transportation – and keeping it clear of snow is a multi-million dollar exercise.

Sadly, and it must be said, Winnipeggers, too, may have grown a bit soft. While we won’t think twice about donning skates to play hockey on an ice covered pond – we have yet to properly embrace the outdoors for our daily travel.

But we have a plan.

It starts with making partnerships and celebrating what’s already happening.

Demonstrating that winter cycling, if properly supported and with the right investments, can truly be “for everybody”. The Forks – arguably Winnipeg’s heart, soul and main tourist attraction – has been at the forefront of the battle to prove that people can and will “go outside in the winter” and proving that “if you build it they will come”… even going so far as to break a Guinness World Record in the process.

In a testament to Winnipeg’s open-mindedness and spirit of equity, cyclists and non-cyclists of all stripes have been working together to achieve a vision – and winter is next.

During the conference we would like to share our successes and our challenges. Discuss what has worked and what doesn’t. Find out what makes our situation unique and typical.

Learn from others as we take this journey towards a winter wonderland filled with bikes.