In the last couple of years there has been a significant upswing in the number of cyclists on the road in Winnipeg. In response to the growing number of cyclists and the need to keep their bikes running like well oiled machines, we have also seen the rapid growth of a community bike shops movement. These shops a great resource for cyclists, but more importantly they also strive to make bikes and knowledge of bicycle repair available to everyone.

Source: The WRENCH by permission

The Winnipeg Repair Education and Cycling Hub or The WRENCH is a non-profit umbrella organization that provides existing and emerging community bike shops with resources and training. They also have the responsibility for recycling and distribution of the many bikes salvaged from the City of Winnipeg’s Brady Landfill. This past summer saw over 350 bikes salvaged from the landfill and given new life while many others were dismantled for their parts. The WRENCH also focuses on school and youth bike programming.

Community bike shops are Do-It-Yourself teaching workshops, run for the most part by volunteers. Visitors to these shops can pick through the array of parts and use the available bike tools to fix their bike or even build themselves a functional bicycle. You don’t need experience because volunteer mechanics will put the right tools in your hands and guide you through any mechanical misfortunes that have befallen your bicycle. All that is asked in return is a small donation, which does not necessarily need to be monetary, it can be your volunteer labour too. 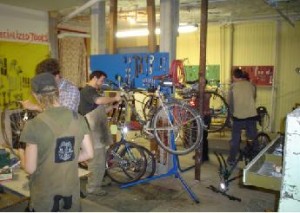 Source: The Bike Dump by permission

Winnipeg’s first community bike shop, The Bike Dump, opened its doors in 2005 and has since inspired four other community bike shops, two community center tool cupboards, three university and two public school shops. Winnipeg now boasts more such community bike shop projects than anywhere else in the world! No kidding! With several more school bike shops in the works and a growing interest in inclusion of bike repair in the school curriculum, the momentum for this movement continues to grow.

This past fall the University of Winnipeg opened it’s Bike Lab, a bike shop run by and for both students and the surrounding community. WRENCH staff were consulted on many aspects of the shop’s development. “It makes so much sense for us to be working to spread information on best practices and what works and what doesn’t for community bike shops here in Winnipeg, so that we don’t re-invent the wheel each time someone wants to start up a new shop,” says Cara Fisher, Programming Director for The WRENCH.

Ultimately the success of these initiatives hinges on the volunteers who put so much time and love into keeping them open and functional. Volunteering can be very inspiring and sometimes addictive. Longtime Bike Dump volunteer Dan Scouten has stuck around for so long because “it’s just so gratifying to see the look in a shop user’s eye when they’re fixing something for the first time by themselves. Sometimes it just clicks, that they have the power and knowledge to keep their bicycle up and running. It’s a very empowering experience for people who perhaps haven’t used tools before.”

So the next time your bike tube explodes, your brakes start squealing, or you are just not sure what is wrong with your bike, stop by any of the community bike shops and get acquainted with the friendly folks wrenching there. You may find yourself quickly up to your elbows in grease or helping others figure out how to keep their machines well-oiled.

For a list and map of the community bike shops in Winnipeg, their open hours and a list of free workshops on bike repair check out the WRENCH.ca.