Sharing the Ride: Hints and Tips to keep it safe and fun! 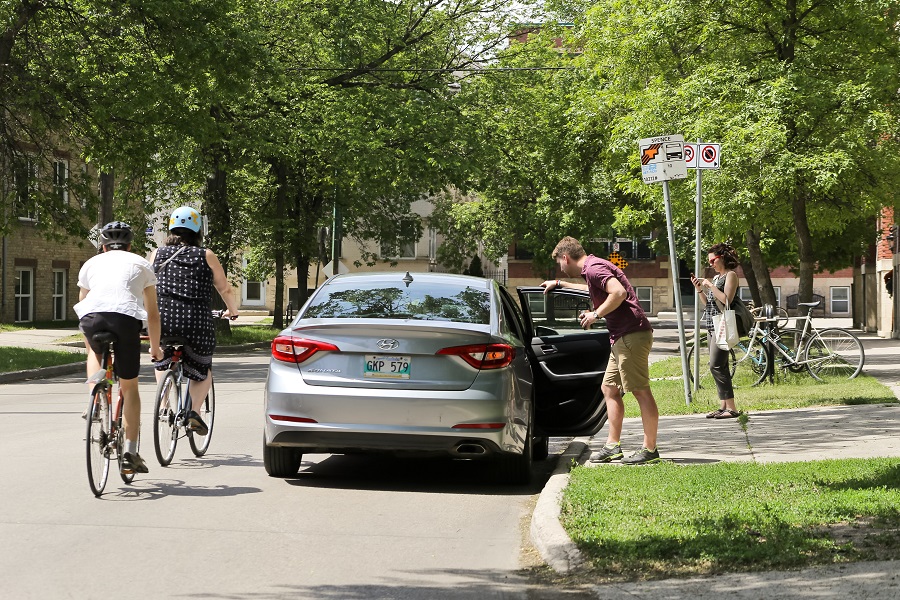 The majority of Manitobans reach for their car keys for everyday trips. In Winnipeg, the average mode-share for driving is almost 80%. Obviously, the consequences of this behaviour are quite bleak for our province and our future. Infrastructure for vehicles is expensive to build and maintain, our roads are more and more clogged with more drivers commuting from communities further and further away, and the quality of air around schools is poor due to the number of kids dropped off in vehicles, as opposed to walking, biking or taking the bus to school.

At the same time, because of the built environment, it’s not realistic to assume that drivers can easily switch to taking transit or walking and biking for everyday trips. Winnipeg Transit does the best they can with the funding they receive, and groups like Functional Transit Winnipeg are advocating for improvements, while the city of Winnipeg slowly works through a pedestrian and cycling strategy that won’t see safe, connected routes completed for at least 20 years. Outside of Winnipeg, our province is vast and transit options between towns is limited or non-existent. We certainly have our challenges as a province.

Side note: in Copenhagen, a city that has strategically invested in healthy transportation over the last 30 years, only 9% of people commute by driving. Picture that the next time you drive during rush hour. (And note, Copenhagen is also a winter city. Don’t let the white stuff get you down.) 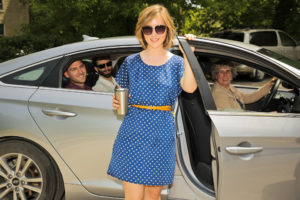 Taking our given circumstances, carpooling is the best, most realistic option that Manitoba has to improve health, wellness, air quality and congestion right now. Even if commuters who regularly drive-alone the majority of the week choose to carpool just once or twice per week, we could see substantial improvements to all of the points above.

To give commuters a handy tool, we are proud to announce GoManitoba! Register with this new platform to connect with like-minded people, share your commute, save time, money and reduce congestion. You can download the app now to begin the search for commuting partners and to be entered to win prizes!

How does it work?

In today’s world of Uber, AirBnB and Tinder, we’re becoming more and more accustomed to the shared economy and connecting with people through apps. But of course, we must always be mindful of safety. First off, it’s important to note that GoManitoba, like Uber, Kijiji and other apps, simply acts as the mechanism to find possible connections. Messages are sent through the app, relaying general information to assist in connecting possible commuting partners. Below is an example of a message I sent to my co-worker, Liz. 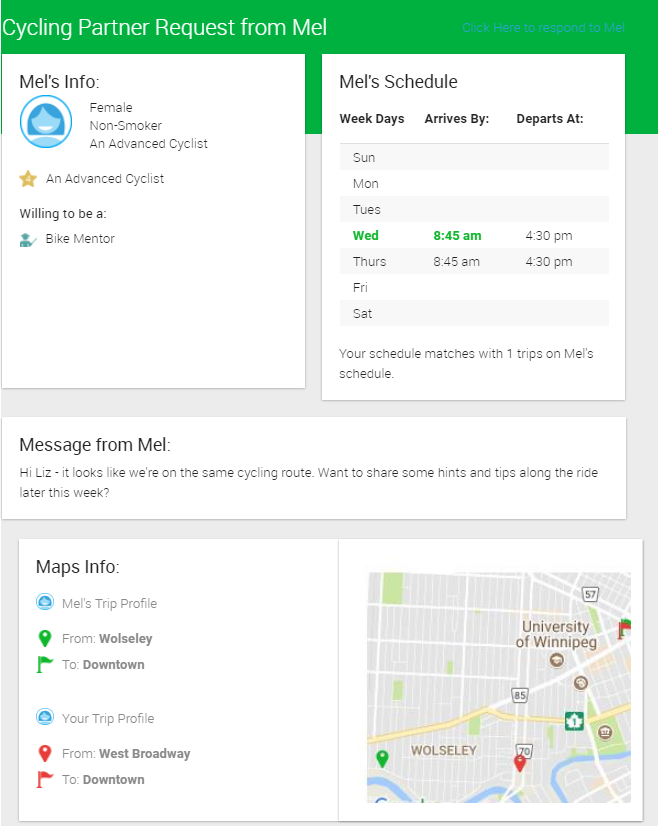 Liz received some basic details about me (that I’m an experienced cyclist, the days when our commute matches up, the neighbourhood I live in and where I’m going. We can see pin-points on a map of our general locations, but no specific addresses (and you can’t zoom in on the map). I don’t have any of Liz’s contact details, so she can choose to respond to this message, or not. Like Kijiji, you can reach out to someone to express your interest in purchasing their old collection of VHS tapes, but it’s up to them to respond.

Tips from our friends and Founding Partner of GoManitoba at Red River College:

Building trust with your carpool partner

*Remember, it is important to listen to your inner voice. If something doesn’t quite feel right with you carpool match, you’re under no obligation to continue the arrangement. Carpooling is supposed to relieve stress, not add to it!

In Manitoba, we seem to think that choosing a method of transportation that isn’t a personal vehicle will mean inconvenience. If you find yourself in this chain of thought, some things to consider are:

We’ve heard from some users about how much more comfortable they are commuting with another person, especially when tackling tough winter roads or when navigating dark morning and evenings in winter. They found it actually made them feel safer to have another person travelling with them in their car! Some people, understandably also have safety concerns about making new connections for carpool partners through this app. We want to answer some of these frequently asked questions here. Please read on and let us know if you have any other questions/concerns about the GoManitoba platform. Happy commuting!

Can anyone see where I live or work if I use my true home and work addresses for trip matching?

Do other users have access to my e-mail address?

Can I meet new ride matches at a local landmark or public space instead of my home address?

Is my information shared with any other services outside of the GoManitoba system?

Is Rideshark a reliable company to trust with my information?

We look forward to GoManitoba connecting citizens from across our province with more sustainable, healthy modes of transportation! Be sure to share your stories with us. To learn more about the platform you can visit GoManitoba’s FAQ page. If you have any other questions please email us at gohappy@greenactioncentre.ca