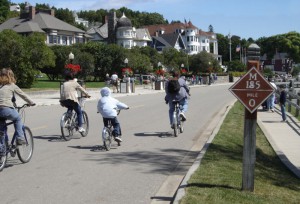 Where is the only state highway in the US where automobiles are banned? Great trivia question! Turns out, it is on Mackinac Island on Lake Huron in Michigan. Michigan, the ground zero of internal combustion and automobile culture. A 13 kilometre bicycle, horse, and roller blade only highway circles the picturesque island resort.

Mackinac’s car-free history dates back to a nineteenth century ordinance banning horseless carriages from from the island. A 1898 bylaw read:

“Resolved: That the running of horseless carriages be prohibited within the limits of the village of Mackinac.” — Mackinac Island Village Council, July 6, 1898

In the early days of the automobile, citizen groups across North America were worried that the newly developing technology would be noisy and dangerous. People were especially concerned that gasoline powered vehicles would spew malodorous pollution endangering health and blackening cities in a corrosive grime.  Edwin Black tells this story in his 2006 book: Internal Combustion: How Corporations and Governments Addicted the World to Oil and Derailed the Alternatives.

“The environmental damage was beginning to accrue in palpable ways. Billows of smoke from tailpipe exhaust combined with clouds from railroad engines and industrial smokestacks to darken the air and burn the lungs. Oil and grease effluent from garages swirled into rivers, poisoning the water. Hydrologists were concerned that groundwater was becoming irreparably toxic.”

Few had yet heard about the then recently discovered greenhouse effect; no one knew the extent to which cars could transform our atmosphere.  But even at the dawn of this age, it is sobering to realize how prescient these early concerns were, and how citizens rose up to demand alternatives, as they successfully did in Mackinac.

Over the past hundred years, the 500 citizens of Mackinac have got around by various means of human powered transportation, supplemented by snowmobiles in winter. Instead of deterring visitors, the car-free status of the island attracts tens of thousands of tourists each summer.

This is a good reminder that as much as people talk about our love affair with cars, whenever there is a chance to get away from motor-vehicular traffic, people jump on it. Here in Manitoba, the car-free resort of Victoria Beach is one of the province’s most popular and prestigious tourist destinations.

But why reserve car-free for tourists, when we can make more areas of our cities car-free for everyone? Head out to one of Winnipeg’s many street festivals this summer. Maybe one day, Winnipeg will join cities like Ottawa, Calgary or Montreal and have a car-free street year round. Albert Street has often been suggested as a possible site. Its not quite Mackinac, but its a start.

While we are on trivia, do you know what Michigan’s state motto is?

“Si quaeris peninsulam amoenam, circumspice” which is Latin for “If you seek a pleasant peninsula, look about you.” Especially, once you get all the cars out of the view.