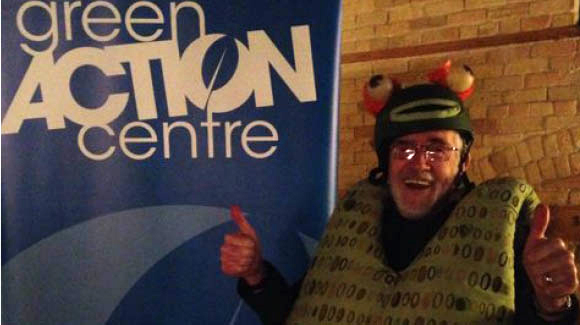 Another Jack Frost Challenge has come and gone, and what a great time we had!

Bougeons en hiver: The Jack Frost Challenge ran from February 7-13, and challenged Manitobans to form teams of 1-5 people to ski, skate, snowshoe, walk, jog, and bike a total of 130km. Participants came up with great team names, had a fun time being active outside, and helped raise awareness for active winter travel. 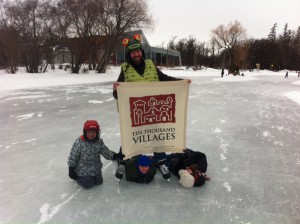 These kids had soooo much fair trade hot chocolate…

Our official launch, Bougeons au Duck Pond: The Jack Frost Kick-off!, was held on Saturday, Feb. 7. We started off the week strong with over 100 skaters, skiers, runners, and tobogganers at the Assiniboine Park Duck Pond. Big thanks to Ten Thousand Villages on Plaza Drive for providing fair trade coffee and hot chocolate.

We had record participation this year! A total of 256 participants (up from 186 in 2014) formed 101 teams and travelled a combined 12, 933.51km over the course of the week. This handily broke last year’s distance of approximately 11, 236km. Collectively, (and with a little imagination) we travelled to Auckland NZ. Or, we traveled to Vijayawada India – the long way – via the North Pole (with our snowshoes, of course). Or, to keep us hardy in true Canadian fashion, we travelled from Winnipeg to Vancouver and back 3.5 times. Or, we could go straight up and make it 3% of the distance to the moon! Okay, now I’m stretching it… 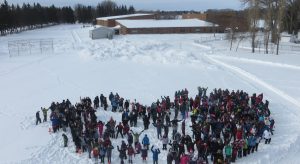 They may be ‘Warriors’, but they sure got a lot of love…

Special recognition goes out to the staff and students at Ecole Arthur Meighen in Portage la Prairie! The ‘Winter Warriors’ together logged 212km! Okay kids and teachers, lets see if you can keep the momentum going for next year.

Facebook followers (like us here) got an inside look at the life of an active frog. Terra the Frog is normally hibernating during the winter months, but she came out early this year to help celebrate the Challenge. She got up to all kinds of fun, including unicycling, snow shoeing, skating, biking, walking, and even hopping! Thanks for joining the fun Terra. Good luck re-entering hibernation; looking forward to seeing you out in the spring! 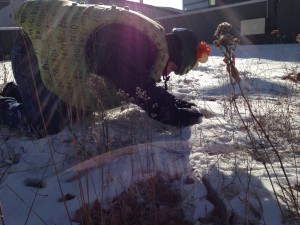 Breaking through the ‘upper crust’ 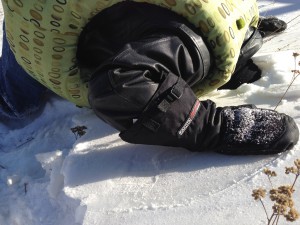 Head first – how else would she do it?

See you in the spring Terra!

Team names – This year we saw your creativity take flight. Some of our favourite names of the year included Salty Rims, the Snotsickles, Femmes Flocons, Cold Diggers, Scrambled Legs, Tis the Ski-son, The Bougerettes, and Spongebob Slowpants. A vote was held at the wrap up party, and this year’s best team name went to I Want to Ride My Icicle.

And let’s not forget our top team for distance! A big way to go to Burchill Complete, who racked up a total of 447.6km. Good work Bougereenos! While Burchill Complete takes top kilometers, it’s clear that they had some pretty intense competition. Check out the list of teams of 130km or more.

Participant dispersion – It was exciting to see participants from across the Province sign up this year. We had representatives from: 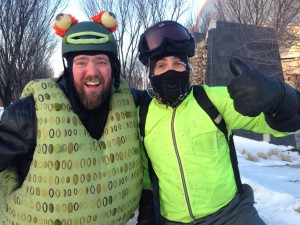 We capped off the week on Friday at MAWS Beer Hall in the Exchange district. The event featured prize draws, shuffleboard, and FG Superman team member Edward playing ukulele for guests. Terra the Frog was there and we sampled some tasty eats while meeting new friends and toasting to a very successful Jack Frost Challenge!

Hope to see you all out again next year!