Manitoba: reflections from a distance

This is the first of a series of posts under the category “Manitoba: reflections from a distance”.  These blog posts from Manitobans who are temporarily living outside the province. This series has been started in the belief that Manitobans can learn from what has been tried elsewhere in building greener communities. Too often, Manitoba has been accused of being too insular. These blog posts will share ideas on what has worked elsewhere and what has not. 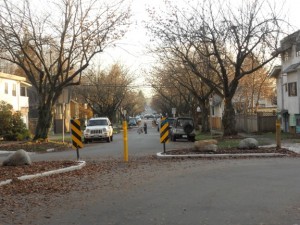 After living in Winnipeg all my life (~29 years) I decided it was time for a change.Although I love Winnipeg, there are many things that are missing. People are too attached to their vehicles and are actually encouraged to do so as a result of urban planning. Winnipeg has been fortunate enough to receive a considerable amount of money for active transportation, but unfortunately this has been accompanied by a backlash against traffic calming and cyclists. 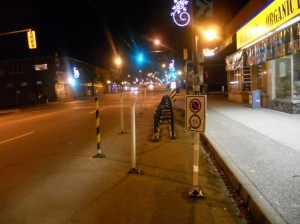 In Vancouver, I was happy to see many traffic calming designs and many signs for bike routes, which are even marked on the overhead street signs. There are intersections that have a button for cyclists to push to initiate a light change. All of the transit buses have a bike rack, not just on one or two routes. There are round-a-bouts and streets where cars are forced to turn one way but cyclists can go straight down the street. Unfortunately it is not perfect. Many bike lanes are shared with transit just like in Winnipeg, and sometimes buses simply get in the way. It is interesting that the biggest vehicle and the smallest vehicle on the road are forced to share space.

The drivers here seem to be more cautious of and respectful to cyclists as well. When you create an environment that is conducive to cycling, you encourage a mentality where drivers accept sharing the road a bit more. This is severely lacking in Winnipeg. Not to say that Vancouver’s traffic calming implements have not received their share of opposition. But maybe this opposition is just the regular aversion to change that people experience rather than loathing of taking away a vehicle’s and driver’s power.

I rode a bike from the edge of East Vancouver to downtown in little time while encountering just a few cars. The routes were easy to find and well marked. In my opinion Winnipeg could be a great(er) city to be a cyclist in if a little effort was put in by the city and its motorists, including cyclists. We aren’t special, but we are vulnerable and need to respect the traffic laws to earn respect back. I’m an advocate for stop signs as yields, but running red lights during rush hour is not going to earn us any points. The city could make a better effort in public education and signage when it comes to traffic calming and bike routes. Various modes of transportation could be better integrated. Park and rides are fine, but being able to ride your bike and take the bus is better. LRT is not the best option for Winnipeg in my books, and since we’ve started BRT maybe we should stick with that.

Although living in Vancouver has been pretty great in many ways, Winnipeg is my home and I wish better things for it. Coming from Winnipeg I would say the most difficult part of cycling in Vancouver are the hills!