Bicycle & Pedestrian Strategy back on 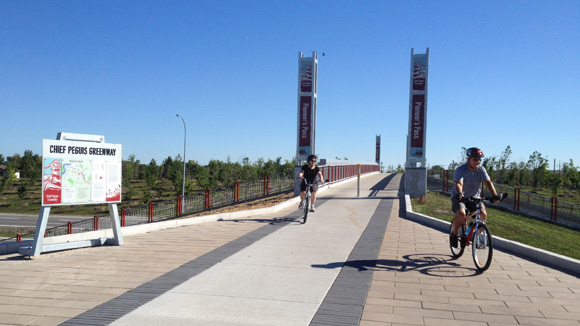 This morning, the City of Winnipeg’s standing policy committee on infrastructure renewal and public works approved $330,000 for the Bicycle and Pedestrian Strategy. This is $70,000 less than what was initially to be spent.

Hearts dropped in July when the City of Winnipeg cancelled the contract on work that was already underway. This critical strategy was to provide direction for years to come on everything from protected bike lanes to safe pedestrian crossings. The confounding turn of events — ironically in the peak time of year for walking and cycling — left many shaking their heads.

Given the immense popularity of the new pathways, bike lanes, cycle tracks and traffic calmed streets added over the past five years — especially the significant investment made in 2010 — it didn’t make sense.

And it’s not just words and wishes. There are more people on bikes in Winnipeg. Counts coordinated each year by Bike Winnipeg show that the number of people commuting by bike in 2012 increased by an estimated 64% over five years earlier [report pdf]. This jumped 12% again this past spring in the 2013 counts.

So good news — development of the Bicycle and Pedestrian Strategy is back on. Yay! But wait a minute, what’s going to be cut now that the contract has been reduced by $70,000?

First, it appears there will be less advertising for the public open houses. No word yet on how many, when or where these will take place. It will need to be soon if the strategy is to be completed by January 2014, in time to feed into next year’s infrastructure building plans.

Second, implementation and monitoring will now be completed by Public Works rather than the consultants. This could be a significant challenge given there is only one person specifically tasked with active transportation at the City of Winnipeg. Apparently resources will be shuffled to get the work done. How exactly that will be done sounds like a good question to ask at the public open house(s).

So stay tuned. Green Action Centre and Bike Winnipeg will keep you updated on what’s happening and how you can be involved. For now, we’re just happy to deliver good news.