Pedaling with my pooch 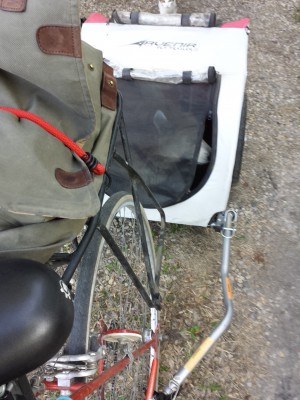 A little over two years ago, a wonderful pal came into my life with four legs, a love of cuddles and a big grin. Trish the dog 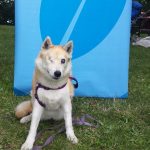 Trish at Bike To Work Day 2015. We had to walk to the site from our house.

is definitely my bestie, and because of her good behaviour and my odd-ball lifestyle – with dog-friendly employers – she comes along with me almost everywhere (I have not taken her to the theatre, and restaurants are a definite no, but other than that, she tends to be by my side!)

Unfortunately, the addition of Trish has made me far more reliant on my car. As someone who lives, works and plays in the Downtown area, I am able to do most of my commutes walking, on bike or by transit. But in Winnipeg, dogs are not allowed on the bus (unless they are in a closed kennel or are a service dog), which left me at a loss of how to take Trish with me on commutes that are longer than a walk. Twice a week, I work in Wolseley, which is an easy bike ride from April to November, and a short bus ride in the winter. But, as of March 2014 I was stuck driving to work twice a week.

This spring, I put finding a means to commute with Trish on my bike as a high priority, and was lucky enough to find a used dog trailer. We’ve just started experimenting with rides, but I am already a fan. It’s easy to attach and detach, travels smoothly behind, and gives Trish some wiggle room to get comfy. Of course, anyone who travels by bike knows that Winnipeg has some pretty rough roads, especially in the bike lanes, so she’s still getting used to the bumps. Also, Trish is blind, so I imagine the smells and sounds are quite overwhelming.

Trish settles in for a ride in “her chariot.”

Removing the barrier of having to commute via car has allowed the city to open up to us, and I can now take Trish on more adventures. I look forward to having her at events this summer like Clean Air Day and Ciclovia, and now we can go to Assiniboine Park to vary our nighttime strolls. Check out this article for more ideas on traveling by bike with your pooch.

For those interested in traveling with dogs on public transit, note that it is allowed in other cities. In Toronto, dogs can go on the TTC outside of rush-hour, Calgary welcomes leashed pets anytime, and I love this story about Eclipse, who can get herself to the Seattle dog park by bus.  In Vancouver, the restriction on dogs on transit was challengedin 2014.

Do you think Winnipeg should consider allowing leashed pets on transit? Have you learned some tricks and strategies for commuting with your pet without relying on your car? Share your thoughts in the comments section!