2015 Commuter Challenge Results Are In! 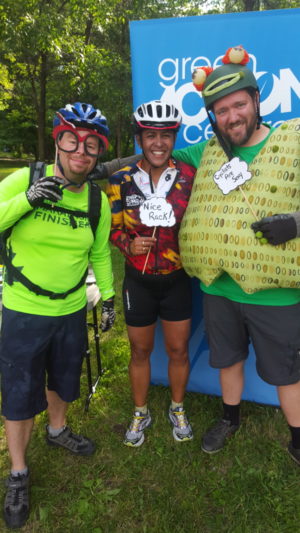 For the 12th consecutive year, Manitoba won the title as the national Commuter Challenge winner for the highest participation rate. Not only was Manitoba the most successful in the Challenge, but three Manitoba Municipalities also won in their population categories – Winnipeg, Thompson, and Souris. The 2015 Commuter Challenge had a record number of workplaces sign up across the province and the weather was with us the entire week.

With the help of a team of volunteers, we were able to put together a great array of prizes this year. Over 60 prize packages were created, ranging in value from approximately $60 to over $1000! We were happy to offer three bikes, three overnight hotel stays, passes to both the Winnipeg Folk Festival and The TD Winnipeg International Jazz Festival, movie passes, vouchers, swag and more! We were also fortunate to be able to offer up an original Kal Barteski painting, designed specifically for the Commuter Challenge and featuring phrases and imagery congruent with the spirit of sustainable transportation.

The 2015 event registered more than 460 workplaces for the May 31st to June 6th Challenge. There were approximately 6,200 workplace participants and an estimated 123,000 employees reached by our messaging. Commuter Challenge participants travelled a total of 574,606 ‘green’ kilometers, which resulted in:

THANK YOU!  To sponsors, prize donors, partners, volunteers at workplaces and schools, and to the Manitoba commuters who participated in the 2015 Commuter Challenge! Congratulations and thank you!