Christmas isn’t found at the mall

“Once again, we come to the Holiday Season, a deeply religious time that each of us observes, in his own way, by going to the mall of his choice.”

A long time ago, in a previous incarnation as a single student, then childless working gal, the Christmas season with its whirlwind of shopping, holiday parties and more shopping was somewhat abstract for me.  Store clerks’ polite queries of: “So are you getting your Christmas shopping all done?” were met with equally polite and somewhat gleeful replies of: “Oh, I don’t actually have any.”

Christmas wasn’t much of a celebration in my family of origin – so shopping for presents wasn’t on my to-do list. Which really wasn’t such a bad thing.

Malls were never a large part of my Universe, and living in the UK and Montreal meant you could readily avoid them if you were so inclined. Then it happened: I became a parent. In Winnipeg. Which changed just about everything. Staying out of malls became nearly impossible.  Where do you go to find sleepers and baby clothes? Probably a mall.  What about snow-suits and swim-suits and kids’ stuff in general? (Ssshh… a mall.) Of course, there’s the occasional trip to places like Wolseley Wardrobe and such – and I really like the idea of supporting small, local merchants. But the reality is you may not want second hand snow boots. And given what my daughter’s look like after a season — it’s not particularly surprising you won’t find these used.

So, a few times a year I bravely venture out to mall-land mostly on the hunt for outfits my little darling will actually wear. Mall shopping is probably one of my least favorite activities.  The crowds can be overwhelming. The stores are all massive, retail chains – and I have a preference for smaller-scaled, local shops.  The mall experience itself, is often harried. And inevitably unpleasant. At Christmas, this all gets magnified about a hundred-fold.

That said, in Winnipeg, where the cold can get bitter, the mall with its halls all decked out with plastic holly becomes alluring, almost seductive. With its promise of presents for everyone on your list, all in one gaily decorated, crowded place, and Christmas music going – why you’d be right in thinking Christmas IS at the mall.  The colours! The ribbons! The lights! The jingle-bells! Why, clearly this is the home of Christmas, isn’t it? Even Santa Claus lives at the mall.

After a recent unsuccessful hunt for some winter gear for the little person — I couldn’t help feeling a sadness about that.  Though Christmas isn’t really part of my family traditions — who doesn’t delight in the dazzle and sparkle?  Especially now, in this cold, dark time of year. Who wouldn’t want to believe in a large, jolly, red-suited benefactor to good children everywhere? Ho-Ho-Ho-ing around, spreading merry and cheer.  My six-year old daughter still believes in Santa – despite what some of her classmates say. And I’m going to support her in that for as long as I can, because childhood and Christmas are all about magic and wonder.  But I won’t be taking her to the mall to look for it. Because shopping-mania isn’t what this holiday is supposed to be about. 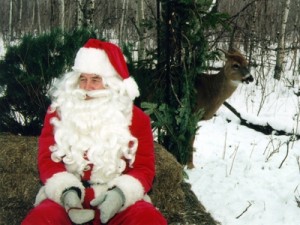 Instead, I’ll look forward to doing some decorating of our own, an outing this weekend to find Father Christmas in the Forest, one of the many seasonal events taking place at Fort Whyte, which I’m looking forward to, since they’re all about sustainability, nature and people — and not just stuff, stuff and more stuff! We’ll also get together for playdates with her friends, attend some holiday gatherings and bake up some treats. She’ll likely get a present or two — there’s a fairy she’s had her eye on at a small store in our neighbourhood. But I don’t want her thinking the magic’s all packaged up pretty at the mall, along with its consumption-driven feeding frenzy.  Apparently stores generate 20-40% of their annual sales in the weeks leading up to Christmas. All that beguiling Christmas pageantry doesn’t change the fact it’s a poor replacement for the real magic and promise of this holiday season.

In the meantime, I still need to find some snow boots. Little girls’ size 1.