Heading home over the new overpass from Birds Hill

At the age of 13, I became very excited about the idea of a weekend bike trip. My enthusiasm translated into an annual weekend bike trip around Manitoulin Island with a friend. My mom was always a great sport and came along to keep us company (and probably to keep us safe, given that we were 13 – 16 years old!). I always enjoyed the excitement of planning and packing for our trips, and meeting the physical and mental challenges that arose along our little adventures.

Beth’s recent post documenting her ride from Birds Hill, along with a short article  in Momentum magazine on camping with children by bike, inspired me to revive my childhood excitement for weekend bike trips. 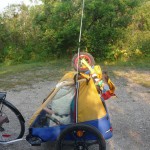 After we decided that we’re going by bike this time (usually I rent a camper from Camper Van Finder – I like to camp in luxury, genrally) we packed our tent, 2 sleeping bags, a double air mattress, and foot pump in the “trunk” of our Chariot bike trailer. Our 4-year old son, Jack, and his stuffed animal “doggie” were passengers in the front of the trailer, along with an extra blanket and a few water bottles. Jack’s strider bike came along for the journey, strapped with a bungee cord to the metal frame of the bike trailer.

Our second bike held our two bike panniers, packed with clothing, toiletries and some of our food, and a soft shelled cooler with the majority of our meals for the overnight jaunt. 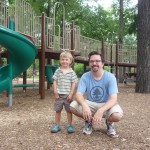 From our home in the West End, we headed east to the Forks, along a series of trails to Scotia Street, and north to Kildonan Park. The large, shaded playground in Kildonan Park was our first main stop of our journey, and gave Jack a chance to stretch his legs and burn a little energy climbing and sliding. Jack then zipped through Kildonan Park’s trails on his balance bike while we followed along behind with the rest of the cargo. At Chief Peguis, we took the new multi-use pathway east, stopping for a juice and some needed rest at Henderson.  From there, we followed the route outlined by Beth, heading north along the North East Pioneer’s Greenway and eventually jumping onto the new Duff Roblin Parkway trail along the floodway. 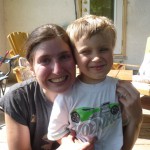 Next summer, we’ll try the trip again… with a few tweaks! I would head out on Friday afternoon around 3:30pm rather than Saturday morning, so as to miss the hot afternoon sun on the Duff Roblin trail. We definitely could have used more AC on that trip! We could then stay 2 nights in Birds Hill, and return home early on Sunday morning after a day of rest in the campground. And even if it meant missing our campsite reservation, I would postpone the trip with weather above 30 degrees C! Otherwise, it was a fun, weekend challenge for our family along new bike paths and quiet residential streets. I give the route a thumbs up!