Community in a box? 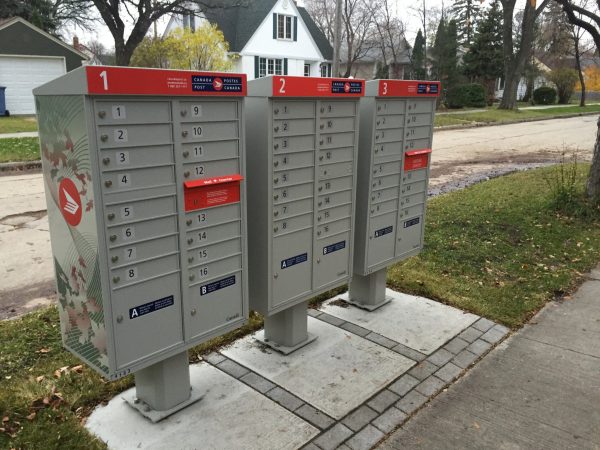 In spite of the initial controversy to cancelling door-to-door pick-up from Canada Post, and subsequent recent decision to stall the process, I’ve found the transition to a community mailbox easier than I thought, and one that has brought a few perks. 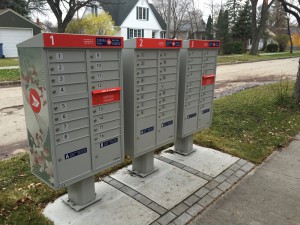 My neighbourhood began using a communal mailbox about two months ago. Initially I groaned with everyone else about the change. I have a family member and a friend who work for Canada Post and their work is important and I was worried about their job safety. In addition, I actually have a great relationship with our current mail carrier. He knows my dog and I like the special things he does, like leaving my packages in secret spots so they are protected until I get home. I consider my mail carrier to be one of my service providers, similar to my doctor, my hair stylist, my dentist; I like their presence in my life and the rapport that comes alongside. I didn’t want that to end.

Outside of that, it turns out that the transition to a community box wasn’t worth, ahem, writing home about. Our box is on the corner of our street. We walk the dogs past twice a day anyways. Not a biggie for us to go pick it up.

What I have noticed are my neighbours. They’re outside. I see their faces. They exist beyond the cloud of exhaust seen in the rear-view as we commute each day. Some of them even smile and say hello and greet the dog. Could it be I’m building new relationships? Excuse the cynicism but I’m a friendly gal and up until recently, I only knew one neighbour on my entire street (who makes delicious homemade pasta by the way, lucky us!). It seems that generally, getting to know our neighbours has taken a backseat, especially in the generation of fast-paced and tech-based.

Now, under the new process, we’re forced to get outside, to get a bit of physical exercise, to at least walk past these people who share a postal code. Could it be, that a community mailbox, actually helps build community?

I’m not quite inviting everyone over for a potluck, but I’ve never invited the dentist either – and I don’t want to sound too Pollyanna here, but it is nice to put faces to the houses, to slowly build a friendly rapport and to be outside and away from screens while doing it. 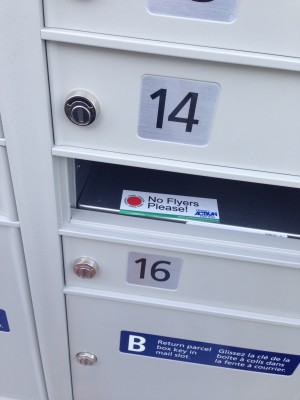 My family member still has their job and my other mail carrying friend retired. Oh – and I was still able to affix a No Flyer sticker inside of my new mail slot, which the mail carrier has respected. Initial concerns alleviated – and a great excuse to flog our purposeful No Flyer stickers, which serve to remind your mail carrier that junk mail isn’t on your priority list. Flyers often end up in the recycling bin anyways, and most of the deals can be found online.

So I propose that the next time you head down to collect your mail, consider that there might be more to that box than you initially grumbled about. Say hello, smile to someone new, and embrace the change.

“Strange as it may seem, I still hope for the best, even though the best, like an interesting piece of mail, so rarely arrives, and even when it does it can be lost so easily.” ~ Lemony Snicket