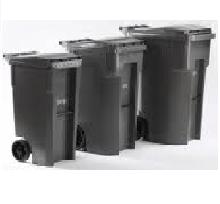 As Winnipeg’s new Garbage and Recycling Master Plan is rolled out across the city, families will be trading giant autobins and limitless garbage bags for roll off carts of 240 litres, about the size of three large bags.  We asked you, does this accommodate your household?  Here is what we found:

There is much to applaud in the City of Winnipeg’s plan. More compost collection and local recycling depots will go some ways towards increasing our diversion rate and moving us from the bottom of the pack of major cities across Canada. One of the most controversial parts of the plan is that it will provide all households a 240 litre cart.  Will this new cart constrain use? Is it too small? Or is 240 litres so big that it will do little to encourage more recycling?

City of Winnipeg officials defend the 240 litre size as a constraint for many households, limiting the amount of garbage they would produce. If the typical household currently needed more than 240 litres, there would be a benefit in the size of the container, even if for many families it would be too large. Let us look at typical garbage production in Manitoba.

Manitobans ranks 2nd among provinces for highest per capita rate of residential waste produced. We throw out 332 kilograms of municipal waste per year – only Newfoundlanders throws out more. Within Winnipeg, we do slightly worse, throwing out 342 kilograms per person in 2009.  We have one of the lowest recycling rates in the country, diverting only about 17 percent of municipal household waste. We can do much better. Given these already excessive rates of garbage production, how does 240 litres per week add up?

Translating kilograms per person, per year into litres per household, per week is tricky. Not all garbage weighs the same, households come in different sizes, and garbage production can vary throughout the year. However, considering typical figures, 240 litres per week seems generous.

Densities for garbage can vary tremendously. Wet, bulky waste, is much heavier than dry, loose garbage. A study of waste in Vancouver, Washington found that depending on the level of service, households produce up to 100 kilograms of garbage per cubic metre of service. Other figures for garbage density are higher, but we will assume that Vancouver’s garbage density is similar to Winnipeg’s. At this rate, a 240 litre container with weekly pickup would allow each household to throw away up to 1250 kilograms of waste each year, or 312 kilograms person for a family of four. This amount is less than the current average of 342 kilograms per person, but is still well above the Canadian average of 256 kilograms per person.

Compared to current usage, a 240 litre container could constrain the usage for some large families, and may encourage them to recycle more. However, large families would still have access to generous garbage space. Given that the introduction of the carts will coincide with greater options for yard waste pick up and other waste reduction options, 240 litres is excessive. For smaller families, or for households that are already practicing waste reduction, the 240 litre container will greatly exceed their needs. For this reason, Green Action Centre has recommended that Winnipeg offer options to households who choose to reduce their waste or recycle more, by offering lower rates for for smaller carts, or alternatively biweekly or monthly pickup.