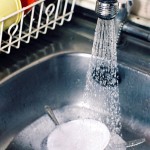 The Organization for Economic Co-operation and Development (OECD) in Europe ranks Canada 28th on a list of 29 developed countries with respect to per capita water consumption. (USA is the only lower-ranked country.) Taking all water uses and dividing by the number of people, Canadians are responsible for the consumption of 1,600 cubic metres of water each per year – twice as much as the average person in France and eight times as much as people in Denmark.

Although Canada holds about seven per cent of the world’s supply of fresh water, the amount that is actually available for domestic household consumption is limited. Much of the water is in northern areas, but about 85 per cent of our population lives within 300 km of the US border.

Fresh water quality is at risk from pollutants that make their way into rivers, lakes and groundwater from cities, industries and farms. And the supply is at risk as climate change rapidly melts the glaciers that feed major prairie rivers and raises the prospect of future periods of drought.

Water to supply Winnipeg homes flows from Shoal Lake in Ontario through a 137-km aquaduct that opened in 1919.

Water Use at Home: Four Things

Rain barrels are a great way to reduce your home and garden water consumption . Two out of three Manitobans water their lawn or garden on a regular basis, and this makes up a big chunk of our summer water bill. Rain barrels can store up to 200 litre of quality (though non-potable) water, and are refilled with as little as a few millimetres of rainfall.

Some resources for making and using rain barrels: