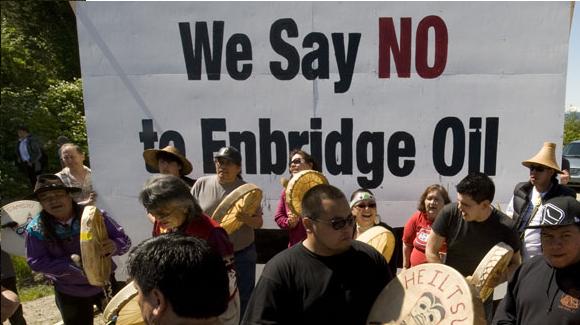 A public forum on the Enbridge Northern Gateway Pipeline 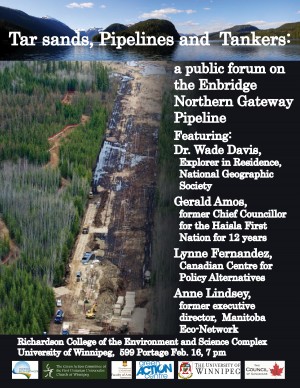 Featuring:
Dr. Wade Davis, Explorer in Residence, National Geographic Society, Visiting Professor and Senior Fellow of the Masters in Development Practice (MDP) Indigenous Development program, University of Winnipeg and author of The Sacred Headwaters: the fight to save the Stikine, Skeena and Nass.

Gerald Amos, former elected Chief Councillor for the Haisla First Nation for 12 years. He has been a leading voice for conservation in Canada for thirty years. He is the author of an open letter to Prime Minister Stephen Harper and Natural Resources Minister, Joe Oliver “No apology forthcoming”.

Lynne Fernandez, Canadian Centre of Policy Alternatives. Lynne has an MA in economics from the University of Manitoba. As a research associate at the Manitoba office of the Canadian Centre for Policy Alternatives, Lynne has the opportunity to research municipal and provincial social and economic policy. She is also interested in labour and environmental issues. Lynne is an ex-pat Albertan who was born and raised in Calgary. She likes living in Winnipeg.

Anne Lindsey, former executive director, Manitoba Eco-Network. Anne has worked and volunteered on Manitoba and national issues such as nuclear waste, forestry, food and pesticides, since 1984, including numerous experiences with environmental reviews.

The National Energy Board is conducting hearings on Enbridge’s proposal for a pipeline from Alberta’s tar sands to the town of Kitimat in the heart of BC’s Great Bear Rainforest. If approved, over 200 oil tankers would be navigating the difficult waters off BC’s Northwest Coast each year. This public forum will focus on the project’s risks to the environment, the economy and to local communities.

Check out our Facebook event for updates and more info.