I don’t know about you — but I’m almost always in a hurry to get to wherever it is I’m going. If there’s some place to be that’s time-sensitive, the push to get out the door is tremendous, especially with a six-year old who’s never in a hurry, doesn’t like being rushed and feels no urgency about being anywhere but here. Between wrangling a child, juggling work and home responsibilities, and the generally fast-paced lifestyles that seem to  be endemic — it’s no surprise that commutes from place to place happen at a frenzied pace.

That being said, the idea of speed + faster = better (+ sooner) is more than misguided and stress-inducing. It’s also dangerous. Did you know, for instance that pedestrians hit at 50km/hr are eight times more likely to be killed than if they are hit at 30 km/hr? 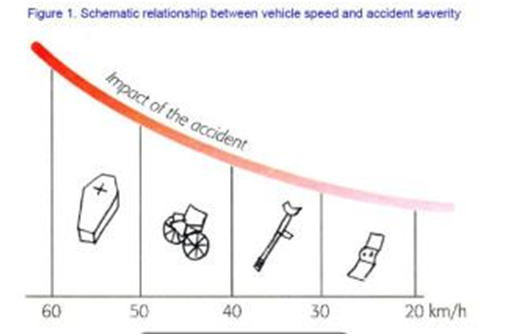 This week, the Province of Manitoba tabled a bill to allow municipalities (if they so choose) to lower the speed limit to 30 km/hr in school zones. The buzz around this issue has percolated throughout the week generating a furor, or perhaps a fury of comments on both the CBC story as well as at the Free Press comments pages.

But consider this, the Child and Youth Friendly Land-Use and Transport Planning Guidelines for Manitoba state that:

Guideline 18 happens to be: Post and enforce much lower speed limits, particularly in urban areas.

This tabled bill is meant to protect the most vulnerable of road users: children and youth and is one of the many factors that contribute to a safer, better environment for everyone. This is not just about posting a new, safer speed limit. It’s about changing driver behaviour and creating awareness around not only this new speed limit, but also why it’s important. Why it’s important to have more livable streets and communities — for children, for the elderly, for those with disabilities. For me and for you.

And, at the risk of sounding redundant, let me just say that pedestrians hit at 50km/hr are eight times more likely to be killed than if they are hit at 30 km/hr.

Slowing down in a fast-paced world will be a hard thing to do. But can we slow down for our children? For all our sakes, I hope so. Because it’s the right thing to do.